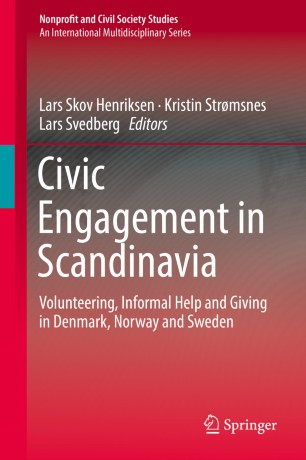 Volunteering, Informal Help and Giving in Denmark, Norway and Sweden

Since the 1990’s, a number of studies have documented a remarkable high and stable amount of popular engagement in civic organizations in Denmark, Norway and Sweden. Often these countries have been considered deviant cases against the proliferating decline of social capital studies.

However, despite great international interest in the Scandinavian region, the volume argues that the civil societies and the civic engagement of these countries remain poorly understood. Most interest in the Scandinavian welfare models addresses the balance between state and market, but under communicates the role played by civil society and popular engagement in associations and voluntary organizations.

The contributions offer a coherent portrait of stability and change in formal and informal forms of civic engagement over the past 25 years as well as offering contextualized knowledge of the history and institutional design in which Scandinavian civil societies are embedded.

Lars Skov Henriksen is professor of sociology at the Department of Sociology and Social Work, Aalborg University, Denmark. His research focusses on civil society in a historical and comparative perspective, transformations of civic engagement, and new forms participation. He directed the Danish national population study on civic engagement in 2012. Currently he is involved in a project about cross-sector welfare collaboration between state and civil society.

Kristin Strømsnes is professor of Comparative Politics at the University of Bergen and Senior Researcher at the Uni Research Rokkan Centre. The academic year 2018-2019, she is a Democracy Visiting Fellow at Harvard Kennedy School – Ash Center for Democratic Governance and Innovation. She was one of the founders of the Norwegian Centre for Research on Civil Society and Voluntary Sector. Her main research interests are political participation and mobilization, civic engagement and social capital, as well as the Scandinavian civil society model.

Lars Svedberg is senior professor and founder of the Institute for civil society studies at Ersta Sköndal Bräcke University College, Stockholm, Sweden. His main research interests include civic engagement, the role of civil society within welfare regimes and marginal positions.