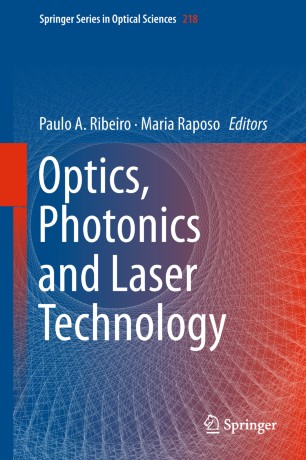 This book covers both theoretical and practical aspects within optics, photonics and lasers. It deals with optical instrumentation and metrology, photonic and optoelectronic materials and devices, nanophotonics, organic and bio-photonics and high field phenomena. Researchers, engineers, students and practitioners interested in any of these fields find here new methods, technologies, advanced prototypes, systems, tools and techniques as well as general surveys indicating future directions.

Paulo Ribeiro received the PhD degree in Materials Sciences and Engineering by Universidade de São Paulo, Brazil. He is Professor at Department of Physics of Faculdade de Ciências e Tecnologia da Universidade Nova de Lisboa, since 2000, where he has been dedicated to lecturing applied optics and photonics and organizing didactic sessions and expositions in the field of optical sciences. He is college ambassador since 2016, for the disclosure of the institution. He is founding member, of the Functional Molecular Systems research line at Centre of Physics and Technological Research of Faculdade de Ciências e Tecnologia of Universidade Nova de Lisboa, created in 2008, where he is engaged in the development and characterization of molecular thin films of organic functional molecules for applications in optics photonics, sensors and devices. Since 2013 he has been chairing PHOTOPTICS international conference series on photonics, optics and laser technology. As a result of his research activities garnered about one hundred papers and communications in international journals and conferences, half of which published in international peer review journals.

Maria Raposo received the PhD degree in Materials Sciences and Engineering by Universidade de São Paulo, Brazil in 1999 and, since 2000, is professor at Physics Department of Faculdade de Ciências e Tecnologia, Universidade Nova de Lisboa, lecturing Solid State Physics, Surface and Interfaces Technology, Conducting Polymers, Molecular Electronics and Physics of Functional Macromoleculares Systems. Since 2008 is head of the Functional Molecular Systems group which research interests include electric and optical properties of ultra-thin films of polymers and biomolecules, interfaces and nano-technology, colloids, molecular architectures for electronics, photonics and magnetism, biomimetic membranes and radiation effect in biological systems. She had several chapters of books and about two hundred of research papers and scientific communications, has been supervisor of Postdocs, PhD students, Master students and undergraduate students, has been coordinator and participant of projects with financial support and has been participant of European Scientific Networks.