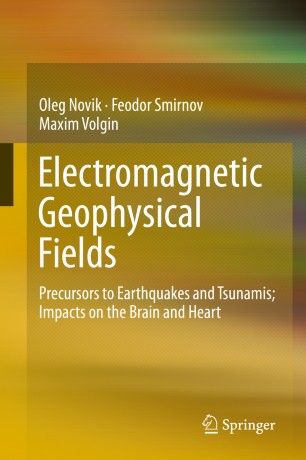 Precursors to Earthquakes and Tsunamis; Impacts on the Brain and Heart

This book develops the theory of electromagnetic (EM) precursors to seaquakes (i.e. underwater earthquakes) and tsunamis, including the sequential stages of the transformation of a weak seismic mechanical excitation of the sea bottom into EM signals in the atmosphere.  It further examines the relationship between geophysics and biophysics, using appropriate mathematical support. Also described is a new model for the magnetic location of the epicenter of a possible land earthquake, as well as a block-scheme of a multidisciplinary multilevel seaquake monitoring complex. Finally, there is a detailed investigation into measured changes of brain bioelectric activity and heart functioning under the influence of moderate geomagnetic storms.

Feodor Alexandrovich Smirnov’s work is connected with measuring the electric potentials of the human cerebral cortex. Since 2005 he has been a junior researcher in the laboratory of Dr. Novik where he is investigating the cosmic weather influence on the coherence of the brain electromagnetic processes.

Maxim Nikolaevich Volgin is a Ph. D student at IZMIRAN where he is investigating the computational methods for partial differential equations and their application in the magnetic location of the earthquake epicenters. The results are published in Russian and English, including papers presented at scientific conferences, and will be included in his PhD thesis.