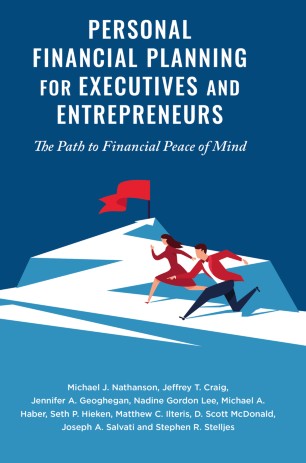 The Path to Financial Peace of Mind

Effective financial planning for executives and entrepreneurs is complex, dense, and impossible to reduce to a single, easy-to-understand formula. Designed to emphasize the importance of effective, targeted financial planning, this book begins by telling a story about a fictional, but plausible, power couple and their family who (spoiler alert!) do pretty much everything wrong in securing their financial future. In most cases, they don’t do the things needed because they don’t know what they are. Using this story as a case study of executives and entrepreneurs, the book breaks down the case into chapters and offers practical discussions of all the key financial planning pillars—investment planning, tax planning, estate planning, philanthropic planning, risk management, and equity-based compensation to name a few—with the tools needed to tailor a plan for virtually every circumstance and need. While there is no single plan that works for everybody, this book will provide a guide with complicated, technical information alongside specific guidance on how to build an effective financial plan.

Additional Authors from The Colony Group include:

“In my work as an investor and advisor to executives and entrepreneurs at all levels, I have come to learn that their amazing business achievements have not always led to personal financial success  for them or their families. This book aims to assist them on their journey. It offers a creative, highly engaging approach to identifying the many obstacles and solutions on the path to financial peace of mind.” (Kevin Mohan, JD/MBA, Senior Advisor, Summit Partners and Senior Lecturer, Harvard Business School)

“Entrepreneurs and executives often find it difficult to attend to their personal financial lives as they launch and grow their businesses. For anyone who can relate to this very real challenge, consider this your most trusted playbook as you seek to identify and address the key elements of achieving financial peace of mind throughout the pivotal moments of your career and life.” (Aaron L. Pullin, CPA, Chief Financial Officer, NS1 and experienced tech entrepreneur)

“This book is an essential read for all executives and entrepreneurs who want to build, maximize, and protect their wealth and ultimately achieve financial independence. It is presented as a cautionary tale of a professional couple’s financial misfortunes and how applied principles of financial planning can result in a more secure and rewarding financial future. The book offers a multitude of practical planning options, advice, and strategies that are tailored specifically for executives and entrepreneurs who wish to attain their personal goals and financial success.” (Carolynn Tomin, CFP®, Director, Boston University Financial Planning Programs)

“I have always felt that you learn a lot more from failures than you do successes. You figure out quickly with whom you want to be in the foxhole. When it comes to your personal finances and the future well-being of your family, you don’t want to find yourself in the foxhole with the wrong team. I found the information in this book around finding that right team to be particularly helpful.” (Scott Roe, Vice President & Chief Financial Officer, VF Corporation)