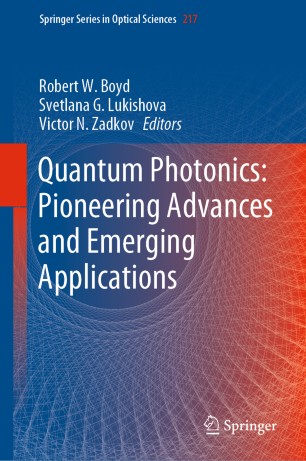 This book brings together reviews by internationally renowed experts on quantum optics and photonics. It describes novel experiments at the limit of single photons, and presents advances in this emerging research area. It also includes reprints and historical descriptions of some of the first pioneering experiments at a single-photon level and nonlinear optics, performed before the inception of lasers and modern light detectors, often with the human eye serving as a single-photon detector. The book comprises 19 chapters, 10 of which describe modern quantum photonics results, including single-photon sources,  direct measurement of the photon's spatial wave function, nonlinear interactions and non-classical light, nanophotonics for room-temperature single-photon sources, time-multiplexed methods for optical quantum information processing, the role of photon statistics in visual perception, light-by-light coherent control using metamaterials, nonlinear nanoplasmonics, nonlinear polarization optics, and ultrafast nonlinear optics in the mid-infrared.

Robert W. Boyd is Professor of Physics and Canada Excellence Research Chair Laureate in Quantum Nonlinear Optics at the University of Ottawa and Professor of Optics and Physics at the University of Rochester. He was born in Buffalo, New York.  He received the B.S. degree in physics from MIT and the Ph.D. degree in physics from the University of California at Berkeley.  His Ph.D. thesis was supervised by Charles Townes and involves the use of nonlinear optical techniques in infrared detection for astronomy. His research interests include studies of “slow” and “fast” light propagation, quantum imaging techniques, nonlinear optical interactions, studies of the nonlinear optical properties of materials, and the development of photonic devices including photonic biosensors.  Professor Boyd has written two books, co-edited two anthologies, published over 400 research papers (≈39,000 citations, Google h-index 88), and been awarded ten patents. He is the recipient of the Arthur L. Schawlow Prize in Laser Science of the APS, the Charles Hard Townes Award of OSA, the Quantum Electronics Award of the IEEE Photonics Society, a Humboldt Research Award, and the Willis E. Lamb Award for Laser Science and Quantum Optics. Professor Boyd is a fellow of APS, OSA, IEEE, and SPIE.  He is a past chair of the Division of Laser Science of APS and has been a member of the Board of Directors of OSA. Professor Boyd has served as a member of the Board of Editors of Physical Review Letters and of the Board of Reviewing Editors of Science Magazine.

Prof. Svetlana G. Lukishova is a Group Leader at the Institute of Optics, University of Rochester. Earlier she worked in Moscow, Russia at the I.V. Kurchatov Nuclear Power Institute and the Institute of Radioengineering and Electronics of the Russian Academy of Sciences, and after moving to the USA, at Liquid Crystal Institute (Kent, OH). She served six years as the Topical/Associate Editor of the journal “Optics Letters” in the field of nanophotonics, nonlinear optics and liquid crystals. She is the author of more than 200 research publications (Physical Review Letters, Optics Letters, Applied Physics Letters, etc.), and near 50 invited presentations in the field of quantum nanophotonics, nonlinear optics and laser physics.  Springer book “Self-focusing: Past and Present. Fundamentals and Prospects” (2009) edited by Lukishova (jointly with Boyd and Shen) is one of the top 25% most downloaded eBooks in the Springer eBook Collection in 2012 and 2015 [63.2K chapter downloads during 2009-April 2018 with most downloaded chapter written by Lukishova (2923 downloads)].  She served as the member of C.E.K. Mees Medal Committee of the Optical Society of America and as a panelist for the National Science Foundation as well as an organizer/scientific board member of several conferences and symposia including International Quantum Electronics Conference, Optics of Liquid Crystals, Frontiers in Optics and others.  She is a recipient of the W.C. Sykes Faculty Engineering Award of the University of Rochester and Diploma of 36th Vavilov’s Lectures on Luminescence of the Russian Academy of Sciences.  Svetlana Lukishova graduated with honors (red diploma) from the Department of General and Applied Physics of the Moscow Institute of Physics and Technology (MIPT) and defended her Ph.D. thesis (MIPT) in high-power laser physics working at the P.N. Lebedev Physical Institute of the Russian Academy of Sciences under the supervision of a Nobel Prize winner A.M. Prokhorov and P.P. Pashinin.

Prof. Victor Zadkov is a director of the Institute of Spectroscopy of the Russian Academy of Sciences (since June 2015) also being a Professor of Physics with the Department of Physics, Lomonosov Moscow State University. Since the end of 2016 he is a head of the chair of Quantum Optics and Nanophotonics at the Faculty of Physics at the most prestigious non-classical University in Russia — Research University “Higher School of Economics.” He received his M.S., Ph.D. and Dr. Sci. Degrees in Physics from Lomonosov Moscow State University. Victor Zadkov's current research interests are in the field of laser physics, interaction of laser radiation with matter, laser applications in life sciences, nanophotonics, quantum optics and foundations of quantum information. He is an author of more than 150 refereed publications including a book and an editor of various collections and special issues of journals. Victor Zadkov is a Fellow of the European Physical Society (EPS), in 2015 was elected as a member of the EPS Council and in 2018 as a member of the EPS Executive Committee. He also served for many years as a jury member for the Prize on Research into the Science of Light, Fresnel Prizes, and QEOD Thesis Prizes. He is also a member of the OSA and serve as a member of the OSA International Council. He used to be a member and then a chair of the OSA Hopkins Leadership in Optics Award Committee for 2013-2016. In 2009 he was elected as a member of the C-17 commission on Quantum Electronics of the IUPAP and in 2011—a chair of this commission. Thanks to his efforts the IUPAP gave a new life to the IUPAP young scientists prize in Quantum Electronics and essentially enforced links with the EPS and QEOD/EPS. Victor Zadkov used to be a member of the steering committee and member of the Russian committee for the International Year of Light 2015 and International Day of Light. He also stays in the roots of many collaboration projects in between Russia and Germany, France, Italy, Slovakia, USA, and China. They include running series of bilateral symposia on Laser Physics, Summer Schools, organizing study tours, etc. Most successful are the ongoing German-Russian and French-Russian Laser Physics Symposia that resulted in lots of joint efforts. Victor Zadkov serves on the editorial boards of the European Physical Journal D, New Scientist (RU), Quantum Electronics, Moscow Univ. Physics Bulletin and as a Program Committee and Int’l Advisory Board member for many Int’l Conferences and Symposia. Victor also serves on many expert and research councils both National and worldwide. In 1984 Victor Zadkov was awarded the Lenin Komsomol Prize in Physics (the highest award for young scientists in the Former Soviet Union). In 1997-1998 he used to work as a research fellow of the Alexander von Humboldt Foundation at the Institute of Applied Physics, University of Bonn, Germany. Since 2003 Victor Zadkov is a President of the Moscow Humboldt Club. In 2008-2014 he served as a Humboldt Ambassador Scientist in Russia.