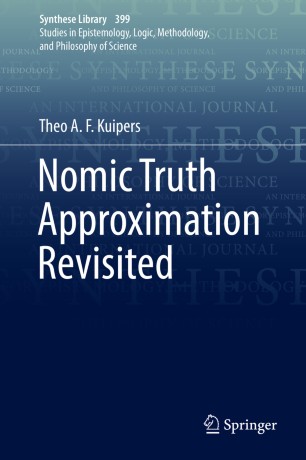 This monograph presents new ideas in nomic truth approximation. It features original and revised papers from a (formal) philosopher of science who has studied the concept for more than 35 years.

Over the course of time, the author's initial ideas evolved. He discovered a way to generalize his first theory of nomic truth approximation, viz. by dropping an unnecessarily strong assumption. In particular, he first believed to have to assume that theories were maximally specific in the sense that they did not only exclude certain conceptual possibilities, but also that all non-excluded possibilities were in fact claimed to be nomically possible.

Besides this, the book presents, in adapted form, the relation with several other topics, such as, domain revision, aesthetic progress, abduction, inference to the best explanation, pragmatic aspects, probabilistic methods, belief revision and epistemological positions, notably constructive realism.

Overall, the volume presents profound insight into nomic truth approximation. This idea seeks to determine how one theory can be closer to, or more similar to, the truth about what is nomically, e.g. physically, chemically, biologically, possible than another theory. As a result, it represents the ultimate goal of theory oriented empirical science.

Theo Kuipers is the author of Studies in Inductive Probability and Rational Expectation (1978), From Instrumentalism to Constructive Realism (2000) and Structures in Science (2001). He is the volume-editor of the Handbook on General Philosophy of Science (2007).

In 2005 there appeared two volumes of Essays in Debate with Theo Kuipers, entitled Confirmation, Empirical Progress, and Truth Approximation and Cognitive Structures in Scientific Inquiry.

Theo A.F. Kuipers (1947) studied mathematics and philosophy in Eindhoven and Amsterdam. He got his PhD in 1978 in Groningen, based on Studies in Inductive Probability and Rational Expectation (Synthese Library 123). From 1988 till 2010 he was full professor of philosophy of science at the University of Groningen. A synthesis of his work on confirmation, empirical progress, and truth approximation, entitled From Instrumentalism to Constructive Realism appeared in 2000 as Volume 287 in the Synthese Library of Kluwer AP. A twin synthesis of his work on the structure of theories, research programs, explanation, reduction, and computational discovery and evaluation, entitled Structures in Science, appeared in 2001 as Volume 301 in the Synthese Library.

In December 2005 there appeared two volumes of Essays in Debate with Theo Kuipers, with in total 34 essays related to the books of 2000 and 2001, respectively. Both volumes start with a synopsis of the corresponding book and each essay is followed by a reply of Kuipers:

In 2009 he became Ridder in de Orde van de Nederlandse Leeuw (Knight in the Order of the Dutch Lion) and in 2010 he became a member of the Koninklijke Hollandse Maatschappij der Wetenschappen (Royal Holland Society of Sciences and Humanities). He retired in 2010 with the farewell lecture “Waarheidsbenadering in theorie en praktijk” (“Truth approximation in theory and practice”).