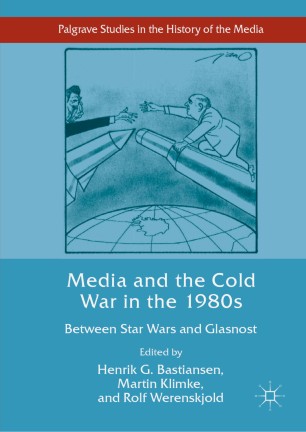 Between Star Wars and Glasnost

The Cold War was a media phenomenon. It was a daily cultural political struggle for the hearts and minds of ordinary people—and for government leaders, a struggle to undermine their enemies’ ability to control the domestic public sphere. This collection examines how this struggle played out on screen, radio, and in print from the late 1970s through the early 1990s, a time when breaking news stories such as Ronald Reagan’s “Star Wars” program and Mikhail Gorbachev’s policy of glasnost captured the world’s attention. Ranging from the United States to the Soviet Union and China, these essays cover photojournalism on both sides of the Iron Curtain, Polish punk, Norwegian film, Soviet magazines, and more, concluding with a contribution from Stuart Franklin, one of the creators of the iconic “Tank Man” image during the Tiananmen Square protests. By investigating an array of media actors and networks, as well as narrative and visual frames on a local and transnational level, this volume lays the groundwork for writing media into the history of the late Cold War.

“One of the best collections of essays on late Cold War film and media history.  This volume shows how the Cold War competition influenced, and was influenced by, journalism, TV, and movies, and how important film and media are for understanding international affairs overall.” (Odd Arne Westad, Kennedy School of Government, Harvard University)

“Eclectic, revealing and exhilarating, this unique collection of essays brings a fresh perspective on the Cold War's crucial final phase.  Eastern and Western experiences sit side by side as the authors weave their way through a dizzying range of cultural forms ranging from East bloc TV miniseries and Anglo-American spy films to Scandinavian journalism, Polish punk rock and Hungarian underground exhibitions.  The final impression is of the irrepressibility of the human spirit even under the shadow of nuclear winter.” (Nicholas J. Cull, Annenberg School for Communication and Journalism, University of Southern California)

“This book represents a wonderful contribution to media history and the cultural history of the Cold War.  The contributions are wonderfully diverse.  They avoid the usual narrow focus on the superpowers, showing how the Cold War was experienced in a wide range of smaller, less dominant countries.  And they bring in a wide range of little-studied media and media actors, from Soviet photojournalists, American men’s magazines and Hungarian artists to Yugoslav historical drama and Polish punk rock.  The contributions are deeply researched, and taken together they add enormous new depth to our understanding of Cold War media.” (Daniel Hallin, Department of Communication, University of California, San Diego, USA, and co-author of Comparing Media Systems: Three Models of Media and Politics and Comparing Media Systems Beyond the Western World)

“Readers will discover that Media and the Cold War in the 1980s presents a broad picture of the ways the various forms of media were engaged with the propaganda battles of the Cold War from the late 1970s to the end of 1980s. By including the analysis of media actors and networks, the contributions present the Cold War as a media phenomenon. Rich in facts and new details the book should find its way onto the desk of anybody interested in Cold War history.” (Epp Lauk, Department of Language and Communication Studies, University of Jyväskylä, Finland, and author of Towards a Civic Society: The Baltic Media's Long Road to Freedom)