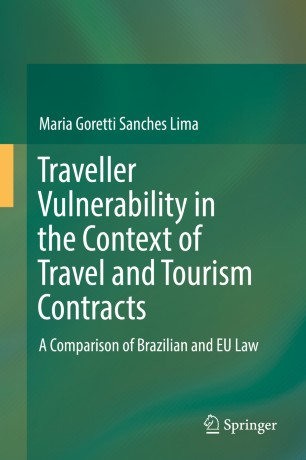 Traveller Vulnerability in the Context of Travel and Tourism Contracts

A Comparison of Brazilian and EU Law

The book highlights the link between consumers and travellers, identifying the meaning of vulnerability in Brazil and the EU. It also covers different types of contracts for tourism and travel services, including online booking processes. Only after 2015, as a result of the directive on package travel and linked travel arrangements, did the EU begin viewing travellers as consumers in the sense of Union Consumer Law; conversely, in Brazil, the traveller has no legal status whatsoever and is considered solely a consumer. As the traveller is implicitly a consumer he/she is subject to vulnerability. However, the definition of vulnerability differs considerably between Brazil and the EU: while in Brazil it is a principle stemming from the Consumer Defence Code, covering all consumers, in the EU vulnerability is not an established principle.

In the EU, although the average consumer is assumed to be reasonably well informed, observant and circumspect, they are also recognised as the weaker party in the contract. That recognition does not fit with the notion of "confident consumer". Vulnerable consumers in the EU are those whose individual characteristics, such as their age, physical or mental infirmity, or credulity, make them particularly susceptible to unfair commercial practices. Conversely, in Brazil these consumers are seen as being hyper-vulnerable, rather than solely vulnerable. In this context, travellers are in a weaker position than regular consumers buying goods or services, because they are outside of their domicile or jurisdiction for a brief or extended period of time.

This book examines two types of traveller vulnerability that make travellers, particularly international ones, a special type of consumers: 1. External and 2. Legal (jurisdiction). Travellers’ vulnerability mainly stems from consumers travelling to different markets and different cultures. As such, they are subject to different laws that require special global attention.

While both the EU and Brazilian system have their respective advantages and disadvantages, the goal of both must be to further increase protection for travellers, including business travellers. In consumer societies, the traveller is indeed a consumer by logical causation and hence a “special consumer”.