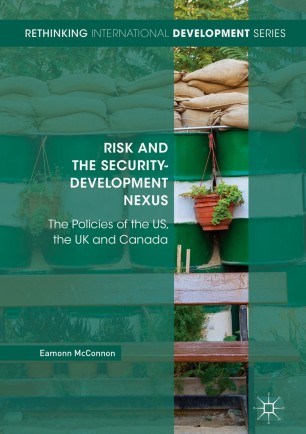 Risk and the Security-Development Nexus

The Policies of the US, the UK and Canada

‘In this comprehensive and wide-ranging analysis, McConnon demonstrates the extent to which security concerns have come to pervade the development policies of the three major donor countries.’
—Rita Abrahamsen, University of Ottawa, Canada

‘An original and compelling analysis of the security-development nexus of three donor countries here combined with a closer look at how their policies play out in two recipient countries, Kenya and Ethiopia, which are actually more representative than the usual high-profile cases of Afghanistan and Iraq. McConnon’s application of the risk-management lens is theoretically innovative and insightful. A most welcome contribution to the growing literature in this area.’
—Stephen Brown, University of Ottawa, Canada

‘The argument that security has been brought in to mainstream development policy partly, but not solely, because of the War on Terror is here meticulously detailed. The implication of this is that the security-development nexus is not an abstract idea, but a risk management strategy by the West. Using extensive documentary evidence McConnon provides a very clear discussion of policy that has big implications for theoretical approaches to development and security.’
—Paul Jackson, University of Birmingham, UK

This book explores the security-development nexus through a study of the merging of security and development in the policies of the US, the UK and Canada. It argues that instead of framing this relationship as a ‘securitisation’ of development, it is best understood as a form of security risk management where development aid is expected to address possible security risks before they emerge. Rather than a single entity, the security-development nexus is instead a complex web of multiple interactions and possibilities. The work at hand is motivated by the increasingly close relationship between security and development actors, which was a consequence of a number of protracted civil conflicts in the 1990s. These cooperations were presented by donors as a common sense solution to conflict resolution and prevention, with the roots of many conflicts being seen to lie in development problems, and security being considered a necessary condition to allow development projects to take place. However, McConnon concludes that the merging of security and development is still largely driven by conventional hard security concerns.

Eamonn McConnon is Researcher at the International Institute for Conflict Resolution and Reconstruction (IICRR) at Dublin City University, Ireland. His research interests are the merging of development and security, the use of development aid for conflict prevention and resolution, failed states and migration.

Eamonn McConnon is Researcher at the International Institute for Conflict Resolution and Reconstruction (IICRR) at Dublin City University, Ireland. His research interests are the merging of development and security, the use of development aid for conflict prevention and resolution, failed states and migration.

“Where does security end and development begin? And is development securitised to the extent that it is compromised? These are the questions that dominate Eamonn McConnon’s excellent analysis of the security-development nexus. Using case studies, fieldwork and discourse analysis, he has crafted a finely argued account of how security interests often instrumentalise development. The result is securitised development in which human and economic development is often through the lens of risk. The book will be on my reading lists” (Roger MacGinty, University of Durham, UK)
Buy options