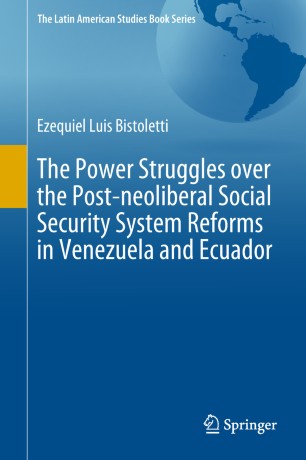 This book carries out a comparative analysis of the power struggles over the post-neoliberal social security reforms in Venezuela and Ecuador. The research breaks down why the social security system reform initiated by Hugo Chávez’ government in Venezuela has come down since its passing in 2002, whereas the social security system reform initiated by Rafael Correa’s government in Ecuador has come along in spite of the obstacles since 2007. All in all, the analysis determined that the struggles over the social security system reforms in both countries remarkably corresponded to each other with regard to their structural conditions, points of contention, and contending actors. In contrast, the analysis established substantial divergences regarding the ways in which the struggles over both reforms came about, due to the divergent development of the struggles for hegemony between government and opposition. These divergences finally brought about the indefinite stagnation of the reform in Venezuela and the advancement of subsequent partial reforms aimed at the universalization of social security in Ecuador.