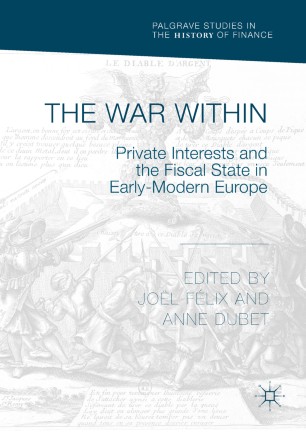 Private Interests and the Fiscal State in Early-Modern Europe

The international financial crisis of 2007-08 and the ensuing scandals continue to raise important debates about the role of institutions in maintaining trust and fighting corruption, as well as in sustaining economic growth and political stability in a globalized world. This book proposes to historicize these problems by looking at the ways in which early-modern Europe responded to similar challenges brought about by the rising costs of international warfare in a period marked by the development of commercial capitalism and the rise of fiscal states.

Building upon the expertise of a group of fiscal historians who are leaders in their respective fields, ten chapters successively examine how Spain, Britain, France, the Southern Low Countries, the Netherlands, Sweden and Prussia dealt with domestic conflicts arising from the business of war, especially issues of financial profit, fraud and corruption. Through a series of case studies, this volume explores how the various European polities engaged with the transformative effects of warfare on the relationship between private and public interests, paving the way for institutional reforms and transformed ethics.

Joël Félix is Professor of European History at the University of Reading, UK.  His specialism is in early-modern fiscal and political history, particularly in France. His main publications include Finance et politique au siècle des Lumières (CHEFF 1999) and Louis XVI et Marie–Antoinette (Payot 2006). With J. Swann, he is the editor of Crisis of the Absolute Monarchy (British Academy/OUP 2013), and he has recently edited Before Fiscal Transparency (Histoire & Mesure 2015).