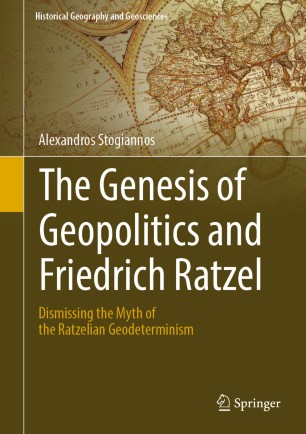 The Genesis of Geopolitics and Friedrich Ratzel

Part of the Historical Geography and Geosciences book series (HIGEGE)

This book discusses the influence of Friedrich Ratzel's ideas in more contemporary geopolitical analytical systems and the geodeterminism commonly attributed to him. The author thoroughly analyzes the structural components of Ratzel's thought.
The research is inspired by the numerous contradictory approaches in the secondary literature, presenting Ratzel as both humanist and racist, geo-determinist and multidimensional analyst, organicist and social scientist, precursor of Geopolitics and opponent to the same idea.
In this work, more particular issues are approached: the establishment of a scientific Political Geography; the methodological approach of his multidisciplinary work; the redefinition of his geopolitical period; his notion of state and the evaluation of sociological and cultural parameters as factors of state power; the biogeographical content of the notion of Lebensraum; his attitude towards the racist theories as well as towards the Darwinian theories; his overall worldview and the confrontation with cosmopolitism; his contribution to an interdisciplinary, positivist and scientific approach in analyzing social and international affairs; his thoughts on the architecture of Europe.
The book will be useful for researchers and students in many scientific fields, such as International Relations, Geopolitics, Geography and History of Geography.