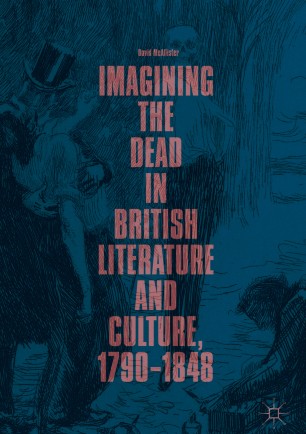 Imagining the Dead in British Literature and Culture, 1790–1848

This book offers the first account of the dead as an imagined community in the early nineteenth-century. It examines why Romantic and Victorian writers (including Wordsworth, Dickens, De Quincey, Godwin, and D’Israeli) believed that influencing the imaginative conception of the dead was a way to either advance, or resist, social and political reform. This interdisciplinary study contributes to the burgeoning field of Death Studies by drawing on the work of both canonical and lesser-known writers, reformers, and educationalists to show how both literary representation of the dead, and the burial and display of their corpses in churchyards, dissecting-rooms, and garden cemeteries, responded to developments in literary aesthetics, psychology, ethics, and political philosophy. Imagining the Dead in British Literature and Culture, 1790-1848 shows that whether they were lauded as exemplars or loathed as tyrants, rendered absent by burial, or made uncannily present through exhumation and display, the dead were central to debates about the shape and structure of British society as it underwent some of the most radical transformations in its history.

David McAllister is a Lecturer in Victorian Literature at Birkbeck, University of London, UK, and a Director of the Birkbeck Centre for Nineteenth-Century Studies. He has published articles on a range of Victorian and Romantic writers, including Dickens, Carlyle, Wordsworth, and Gaskell.

“Imagining the Dead in British Literature and Culture, 1790–1848, is a surprising book … . Imagining the Dead draws upon sources of an imaginative and historical nature, blending literature, politics, educational psychology and social history to identify a unique, convincing and rather unexpected narrative that traverses periodic boundaries to connect two significant phases of development in the cultural history of death in Britain. It is a highly commendable addition to what is a burgeoning field of study.” (Eric Parisot, The Review of English Studies, June 25, 2019)
Buy options