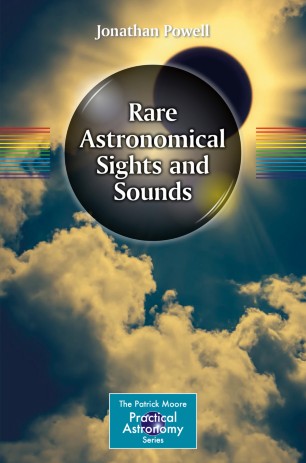 The universe contains many unusual sights and sounds, most of which are either very difficult to witness or simply go unnoticed. With the right tools, time, and location, some of the often talked about but seldom seen and heard gems in our skies can finally be observed.
This book introduces readers to the rare and ephemeral happenings above our heads. It offers a crash course in astronomical history, detailing the observations, assumptions, and inventions of different cultures over time as they turned their studies to the stars. Using this as a baseline to redefine truly "rare" occurrences, Jonathan Powell then provides modern-day astronomers at all levels with pointers for what they can witness and when.
From phenomena as old and far-off as a supernova witnessed a thousand years ago, and as recent and nearby as Sputnik's famous beeping, this book covers everything that one must know to see, hear, and appreciate the astronomical events happening around us.

Jonathan Powell is a native of South Wales. With an interest in astronomy and related subjects since the late 1970’s, Jonathan has written for UK national astronomical magazines, and broadcast on the topic at both the regional and national level for BBC Radio, dating back to 1985. Jonathan also took part in a BBC Radio 4 documentary series on meteorites. He has been secretary of his local astronomical society for the past 20 years and is the British Astronomical Association’s "Campaign for Dark Skies" county officer. A former member of the Association for Astronomy Education – which encouraged and promoted astronomy among the young – he also headed up "SpaceQuest," an educational lecture tool, which toured schools with a two hour presentation on astronomy. His publications include three articles in Astronomy Now magazine. He has written a book about castles in South and West Wales, Fortress Wales, and articles on observational astronomy published in astronomical society newsletters.

Selected by Choice magazine as an Outstanding Academic Title for 2019

“This is an excellent book for those interested in what is going on in the universe without delving into too much detail. Interestingly enough, Powell concludes by reiterating what Haldane said nearly a century before. … Summing Up: Highly recommended. All libraries.” (C. G. Wood, Choice, Vol. 526 (8), April, 2019)