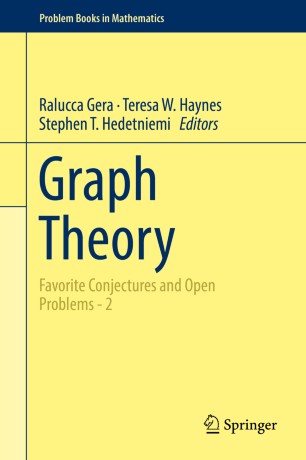 This second volume in a two-volume series provides an extensive collection of conjectures and open problems in graph theory. It is designed for both graduate students and established researchers in discrete mathematics who are searching for research ideas and references. Each chapter provides more than a simple collection of results on a particular topic; it captures the reader’s interest with techniques that worked and failed in attempting to solve particular conjectures. The history and origins of specific conjectures and the methods of researching them are also included throughout this volume. Students and researchers can discover how the conjectures have evolved and the various approaches that have been used in an attempt to solve them. An annotated glossary of nearly 300 graph theory parameters, 70 conjectures, and over 600 references is also included in this volume. This glossary provides an understanding of parameters beyond their definitions and enables readers to discover new ideas and new definitions in graph theory.

The editors were inspired to create this series of volumes by the popular and well-attended special sessions entitled “My Favorite Graph Theory Conjectures,” which they organized at past AMS meetings. These sessions were held at the winter AMS/MAA Joint Meeting in Boston, January 2012, the SIAM Conference on Discrete Mathematics in Halifax in June 2012, as well as the winter AMS/MAA Joint Meeting in Baltimore in January 2014, at which many of the best-known graph theorists spoke. In an effort to aid in the creation and dissemination of conjectures and open problems, which is crucial to the growth and development of this field, the editors invited these speakers, as well as other experts in graph theory, to contribute to this series.

Ralucca Gera is the Associate Provost for Graduate Education and Professor of Mathematics in the Applied Math Department at the Naval Postgraduate School.  She is also a researcher in the Center for Cyber Warfare at the Naval Postgraduate School and the Network Science Center at United States Military Academy.  Her research interests include graph theory, network science, machine learning and artificial intelligence.

Stephen T. Hedetniemi is a Professor Emeritus in the School of Computing at Clemson University. His research interests include graph theory, graph algorithms, and computational complexity.

Teresa W. Haynes is a Professor of Mathematics at East Tennessee State University and a Visiting Professor at the University of Johannesburg, South Africa. Her research interest is graph theory.