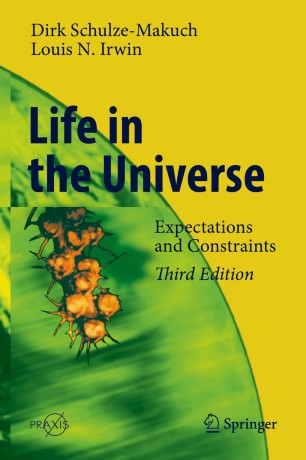 This class-tested textbook examines the basic elements of living systems: energy, chemistry, solvents, and habitats in crucial depth. These elements define the opportunities and limitations for life on other worlds. The book argues that life forms we would recognize may be more common in our solar system than many assume. It also considers, however, the possibility of exotic forms of life based on backbones other than carbon, liquids other than water, and energy other than light. The authors offer an operational definition of life and summarize prevailing thoughts on plausible pathways for the origin of life on Earth and other worlds. They discuss remarkable adaptations to extreme environments, the nature and detection of geo- and biosignatures, the future and fate of living systems, and suggestions for the optimization of future exploratory space missions.

The entire text has been thoroughly updated in this third edition, with new sections added on exoplanets, synthetic life, the search for extraterrestrial life, and a tour of the bodies in our Solar System for signs of conditions conducive for life. While informed speculation in this emerging field cannot be avoided, the authors have clearly distinguished between what is known as fact and what are reasonable expectations. They present an objective assessment of the plausibility of life on other worlds that is broad and deep enough for the expert and for use as an advanced text in astrobiology, while avoiding scientific jargon as much as possible to make this intrinsically interdisciplinary subject understandable to a broad range of readers.

Dirk Schulze-Makuch is a professor at the Technical University Berlin, Germany, and an adjunct professor at Arizona State University and Washington State University. He is interested in all aspects of astrobiology, but particularly whether other planets and moons inside and outside our Solar System could serve as a potential habitat for life. He received the Friedrich-Wilhelm Bessel Award from the Humboldt Foundation for extraordinary achievements in theoretical biology  in 2010.  He is best known for his publications on extraterrestrial life, which span nearly 200 scientific articles and several books such as Cosmic Biology: How Life Could Evolve on other Worlds (2011),  Megacatastrophes! Nine Strange Ways the World Could End (2012),  The Extraterrestrial Encyclopedia (2016) and The Cosmic Zoo: Complex Life on Many Worlds (2017), as well as earlier editions of Life in the Universe: Expectations and Constraints (2004 and 2008).

Louis Irwin is a professor emeritus of biological sciences at the University of Texas at El Paso. He has published close to 100 research papers, reviews, encyclopedia entries, and chapters on neuroscience, astrobiology, and evolution.   He is particularly interested in evolutionary trajectories under different conditions, including those that lead to intelligent and technologically capable forms of life. He has written a neuroscience memoir (Scotophobin, 2006), and co-authored books on evolution (The Evolutionary Imperative, 2016), and astrobiology (Life in the Universe: Expectations and Constraints, 2004 and 2008) and Cosmic Biology: How Life Could Evolve on other Worlds (2011).

“This book does a comprehensive job of touching on the many disparate topics that constitute the discipline. … a useful book, which provides a starting point for those readers wishing to explore the primary literature in astrobiology. Summing Up: Recommended. Advanced undergraduates through faculty and professionals.” (P. K. Strother, Choice, Vol. 56 (11), July, 2019)
Buy options