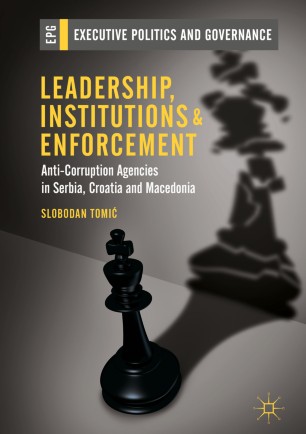 Part of the Executive Politics and Governance book series (EXPOLGOV)

“Leadership, Institutions and Enforcement provides a novel perspective on how to make anti-corruption agencies work. Bringing together the literature on regulation, independent agencies and anti-corruption, it convincingly explains variation in enforcement practices across Serbia, Croatia and Macedonia since the early 2000s. Tomic’s book is a must-read for scholars and practitioners interested in anti-corruption and regulatory reform in new democracies.”
Jan-Hinrik Meyer-Sahling, University of Nottingham, UK
“This is an innovative look at the workings of anti-corruption agencies in the former Yugoslavia. Tomic applies different theories of public management to investigate how such agencies will perform under different institutional contexts. The book makes an important contribution to political science by studying how government watchdogs perform in fledgling democracies and should be read by scholars and practitioners alike.”
Colin Provost, University College London, UK
This book presents an analysis of five anticorruption agencies (ACAs) from Serbia, Macedonia and Croatia, exploring the impact of organisational factors and leadership on their enforcement patterns during the first decade of the transitional reforms (2001-2012). Contrary to the conventional theory of agency insulation, the analysis reveals that the ACAs’ de facto autonomy was not crucially shaped by their statutory independence, but rather by the reputational management of their leaders. The book draws on a mixture of qualitative and quantitative analysis to document these reputational strategies and how they shaped the ACAs’ de facto autonomy. The findings also suggest that the ACAs’ organisational model – defined by the delegated mandate and powers (preventative vs suppressive) – represented a key variable that mediated under which conditions high de facto autonomy can be achieved.  The book offers contributions to the study of anticorruption policy and ethics regulation, as well as the wider inquiry into drivers of agency independence, particularly in transitional contexts.
Slobodan Tomić is Marie-Sklodowska Curie Fellow in the College of Social Sciences and Law at the University College Dublin, Republic of Ireland (2017-2019). His expertise is in the fields of public administration, regulation, integrity policies, and public sector oversight.

Slobodan Tomić is Marie-Sklodowska Curie Fellow in the College of Social Sciences and Law at the University College Dublin, Republic of Ireland (2017-2019). His expertise is in the fields of public administration, regulation, integrity policies, and public sector oversight.