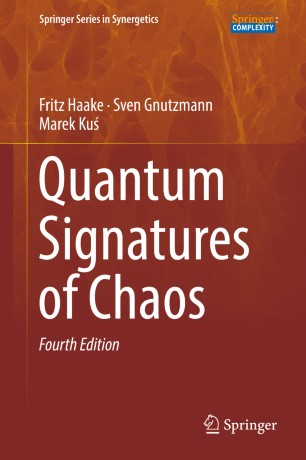 This by now classic text provides an excellent introduction to and survey of the still-expanding field of quantum chaos. For this long-awaited fourth edition, the original text has been thoroughly modernized.

The topics include a brief introduction to classical Hamiltonian chaos, a detailed exploration of the quantum aspects of nonlinear dynamics, quantum criteria used to distinguish regular and irregular motion, and antiunitary (generalized time reversal) and unitary symmetries. The standard Wigner-Dyson symmetry classes, as well as the non-standard ones introduced by Altland and Zirnbauer, are investigated and illustrated with numerous examples. Random matrix theory is presented in terms of both classic methods and the supersymmetric sigma model. The power of the latter method is revealed by applications outside random-matrix theory, such as to quantum localization, quantum graphs, and universal spectral fluctuations of individual chaotic dynamics. The equivalence of the sigma model and Gutzwiller’s semiclassical periodic-orbit theory is demonstrated. Last but not least, the quantum mechanics of dissipative chaotic systems are also briefly described.

Each chapter is accompanied by a selection of problems that will help newcomers test and deepen their understanding, and gain a firm command of the methods presented.