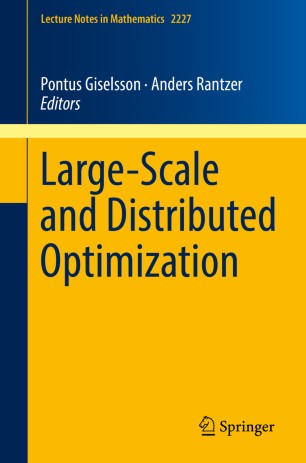 This book presents tools and methods for large-scale and distributed optimization. Since many methods in "Big Data" fields rely on solving large-scale optimization problems, often in distributed fashion, this topic has over the last decade emerged to become very important. As well as specific coverage of this active research field, the book serves as a powerful source of information for practitioners as well as theoreticians.
Large-Scale and Distributed Optimization is a unique combination of contributions from leading experts in the field, who were speakers at the LCCC Focus Period on Large-Scale and Distributed Optimization, held in Lund, 14th–16th June 2017. A source of information and innovative ideas for current and future research, this book will appeal to researchers, academics, and students who are interested in large-scale optimization.

Pontus Giselsson is an Associate Professor at the Department of Automatic Control at Lund University, Sweden. His current research interests include mathematical optimization and its applications in, e.g., control, signal processing, and machine learning. He received a M.Sc. degree from Lund University in 2006 and a Ph.D. degree from Lund University in 2012. During 2013 and 2014, he was a postdoc at Stanford University. In 2012, he received the Young Author Price at an IFAC Symposium, in 2013 he was a finalist for the Best Student Paper Award at the American Control Conference, in 2014 he received the Young Author Price at the IFAC World Congress, and in 2015 he received the Ingvar Carlsson Award from the Swedish Foundation for Strategic Research.
Anders Rantzer received a PhD in 1991 from KTH, Stockholm, Sweden. After postdoctoral positions at KTH and at IMA, University of Minnesota, he joined Lund University in 1993 and was appointed professor of Automatic Control in 1999. The academic year of 2004/05 he was visiting associate faculty member at Caltech and 2015/16 he was Taylor Family Distinguished Visiting Professor at University of Minnesota. Since 2008 he coordinates the Linnaeus center LCCC at Lund University. Rantzer has been associate editor of IEEE Transactions on Automatic Control and several other journals. He is a winner of the SIAM Student Paper Competition, the IFAC Congress Young Author Price and the IET Premium Award for the best article in IEE Proceedings - Control Theory & Applications during 2006. He is a Fellow of IEEE and a member of the Royal Swedish Academy of Engineering Sciences. For the period 2013-15 he was also chairman of the Swedish Scientific Council for Natural and Engineering Sciences. His research interests are in modeling, analysis and synthesis of control systems, with particular attention to uncertainty, optimization and distributed control.