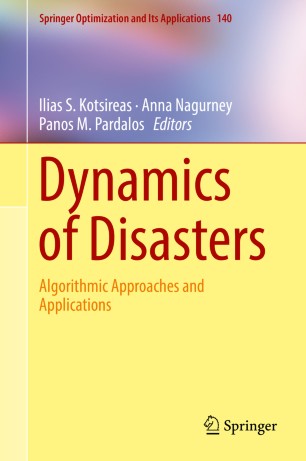 Part of the Springer Optimization and Its Applications book series (SOIA, volume 140)

This book surveys new algorithmic approaches and applications to natural and man-made disasters such as oil spills, hurricanes, earthquakes and wildfires. Based on the “Third International Conference on Dynamics of Disasters” held in Kalamata, Greece, July 2017, this Work includes contributions in evacuation logistics, disaster communications between first responders, disaster relief, and a case study on humanitarian logistics. Multi-disciplinary theories, tools, techniques and methodologies are linked with disasters from mitigation and preparedness to response and recovery. The interdisciplinary approach to problems in economics, optimization, government, management, business, humanities, engineering, medicine, mathematics, computer science, behavioral studies, emergency services, and environmental studies will engage readers from a wide variety of fields and backgrounds.

Ilias S. Kotsireas serves as a full professor of Computer Science at Wilfrid Laurier University in Waterloo, Ontario, Canada. In 2002 he founded the CARGO Lab, and serves as its director for more than 15 years. He has over 150 refereed journal and conference publications, chapters in books, edited books and special issues of journals, in the research areas of Computational Algebra, Metaheuristics, High-Performance Computing, Dynamical Systems and Combinatorial Design Theory. He serves on the Editorial Board of 7 international journals. He serves as the Managing Editor of a Springer journal and as the Editor-in-Chief of a Springer journal and a Birkhauser book series. He has organized a very large number of international conferences in Europe, North America and Asia, often serving as a Program Committee Chair or General Chair. His research is and has been funded by NSERC, the European Union and the National Natural Science Foundation of China (NSFC). He served as Chair of the ACM Special Interest Group on Symbolic Computation (SIGSAM) on a 4-year term: July 2013 to July 2017. He is a co-chair of the Applications of Computer Algebra Working Group (ACA WG), a group of 45 internationally renowned researchers that oversee the organization of the ACA conference series. He has delivered more than 10 invited/plenary talks at conferences around the world.Anna Nagurney is the John F. Smith Memorial Professor in the Department of Operations and Information Management at the Isenberg School of Management at the University of Massachusetts Amherst and is also the Founding Director of the Virtual Center for Supernetworks. Anna received her AB, ScB, ScM, and PhD degrees from Brown University in Providence, Rhode Island. She is the author/co-author of over 190 refereed journal articles and 14 books and has been recognized for her research with honors and awards, including being elected an INFORMS Fellow in 2013 and an RSAI Fellow in 2007.  She is the recipient of a 2016 INFORMS Volunteer Service Award for Distinguished Service,  the 2007 WORMS Award,  and the 2005 Moving Spirit Award of INFORMS. Anna has held a variety of visiting positions, including being a Science Fellow at the Radcliffe Institute for Advanced Study at Harvard University,  a Visiting Fellow at All Souls College at Oxford University in the UK, a Visiting Professor at the University of Gothenburg and at the Royal Institute of Technology in Sweden. She has also been a Fulbrighter twice – in Austria and Italy and her research has received support from the National Science Foundation and the Rockefeller Foundation.
Panos M. Pardalos is a Distinguished Professor and the Paul and Heidi Brown Preeminent Professor in the Departments of Industrial and Systems Engineering at the University of Florida, and a world renowned leader in Global Optimization, Mathematical Modeling, and Data Sciences. He is a Fellow of AAAS, AIMBE, and INFORMS and was awarded the 2013 Constantin Caratheodory Prize of the International Society of Global Optimization. In addition, Dr. Pardalos has been awarded the 2013 EURO Gold Medal prize bestowed by the Association for European Operational Research Societies. This medal is the preeminent European award given to Operations Research (OR) professionals for ”scientific contributions that stand the test of time.” Dr. Pardalos is also a Foreign Member of the Lithuanian Academy of Sciences, the Royal Academy of Spain, and the National Academy of Sciences of Ukraine. He is the Founding Editor of Optimization Letters, Energy Systems, and Co-Founder of the International Journal of Global Optimization. He has published over 500 papers, edited/authored over 200 books and organized over 80 conferences.