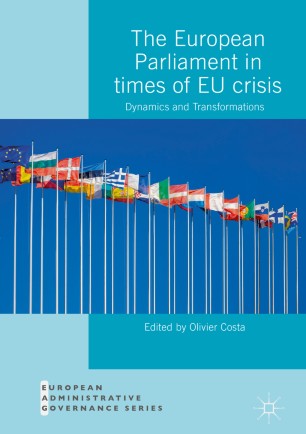 The European Parliament in Times of EU Crisis

"This book looks at the evolution of the European Parliament from a wide number of angles and in depth. It well illuminates how this fascinating and unique institution - the worlds first experiment in trans-national democracy - continues to innovate, to surprise and to have a significant impact in ways (both positive and negative) that were not always predicted."

—Richard Corbett, MEP for Yorkshire and the Humber, UK Labour Party leader in the European Parliament

“Does the European Parliament effectively represent Europe’s citizens in the legislative process? Is the EP a check on the governments, big member states, or big business? If the EP has become so powerful, why hasn’t the EU’s democratic deficit been solved? This book answers these and many other questions, extensively reviewing existing findings and setting agendas for future research. This is essential reading for scholars of European politics”

This book assesses the changes that have occurred within the European Parliament and its external relations since the Lisbon treaty (2009) and the last European elections (2014). It is undoubtedly the institution that has evolved the most since the 1950s. Despite the crises experienced by European integration in the last years, the Parliament is still undergoing important changes in its formal competences, its influence on policy-making, its relations with other EU institutions, its internal organisation and its internal political dynamics. Every contribution analyses the most recent aspects of these evolutions and addresses overlooked topics, providing an overview of the current state of play which challenges the mainstream intergovernmental approach of the EU.

This project results from research conducted at the Department of European Political and Governance Studies of the College of Europe. Individual research of several policy analysts of the European Parliamentary Research Service (EPRS) has contributed to this endeavour.

Olivier Costa is Research Professor at the CNRS, Bordeaux, France and Director of European Political and Governance Studies at the College of Europe, Bruges, Belgium. He is co-director of the European Jean Monnet Centre of Excellence of Aquitaine.

Olivier Costa is Research Professor at the CNRS, Bordeaux, France and Director of European Political and Governance Studies at the College of Europe, Bruges, Belgium. He is Co-Director of the European Jean Monnet Centre of Excellence of Aquitaine. His research interests include EU institutions and policies, European Parliament, French Parliament and comparative legislative politics.