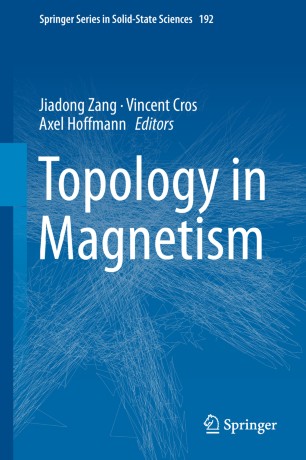 This book presents both experimental and theoretical aspects of topology in magnetism. It first discusses how the topology in real space is relevant for a variety of magnetic spin structures, including domain walls, vortices, skyrmions, and dynamic excitations, and then focuses on the phenomena that are driven by distinct topology in reciprocal momentum space, such as anomalous and spin Hall effects, topological insulators, and Weyl semimetals. Lastly, it examines how topology influences dynamic phenomena and excitations (such as spin waves, magnons, localized dynamic solitons, and Majorana fermions). The book also shows how these developments promise to lead the transformative revolution of information technology.

Prof. Jiadong Zang received a Ph.D. in Physics from Fudan University in 2012. He then carried out postdoctoral research at the Johns Hopkins University. He joined the University of New Hampshire faculty in 2015. His research interest is in theoretical studies of magnetism and spin transport in general, and topological spin textures in particular.

Dr. Vincent Cros is a CNRS senior researcher in the CNRS/Thales research lab (Palaiseau, France) that is one of the pioneering groups in the field of spintronics. Since 2000, he is leading there the research activities on spin transfer effects and its related potential applications to radiofrequency spintronic devices. His current research interests include: spin transfer induced dynamics of magnetic solitons, nonlinear phenomena induced by spin torque, spin-orbitronics and more recently the physics of magnetic skyrmions in nanostructures.

Dr. Axel Hoffmann is currently the Senior Group Leader of the Magnetic Films Group within the Materials Science Division at the Argonne National Laboratory. His research interests encompass a wide variety of magnetism related subjects, including basic properties of magnetic heterostructures, spin-transport in novel geometries, and biomedical applications of magnetism. His main research focus has recently been on pure spin currents investigated by magnetotransport and magnetization dynamic measurements.