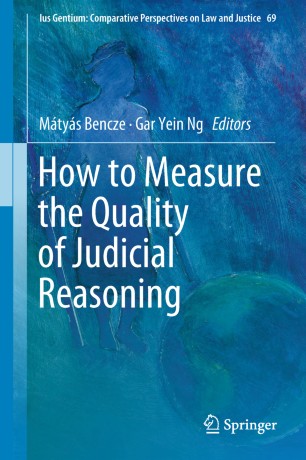 How to Measure the Quality of Judicial Reasoning

This edited volume examines the very essence of the function of judges, building upon developments in the quality of justice research throughout Europe. Distinguished authors address a gap in the literature by considering the standards that individual judgments should meet, presenting both academic and practical perspectives. Readers are invited to consider such questions as: What is expected from judicial reasoning? Is there a general concept of good quality with regard to judicial reasoning? Are there any attempts being made to measure the quality of judicial reasoning? The focus here is on judges meeting the highest standards possible in adjudication and how they may be held to account for the way they reason.

The contributions examine theoretical questions surrounding the measurement of the quality of judicial reasoning, practices and legal systems across Europe, and judicial reasoning in various international courts. Six legal systems in Europe are featured: England and Wales, Finland, Italy, the Czech Republic, France and Hungary as well as three non-domestic levels of court jurisdictions, including the Court of Justice of the European Union (CJEU). The depth and breadth of subject matter presented in this volume ensure its relevance for many years to come.

All those with an interest in benchmarking the quality of judicial reasoning, including judges themselves, academics, students and legal practitioners, can find something of value in this book.

Dr. Mátyás Bencze is a professor at the Faculty of Law, University of Debrecen, Hungary, and a research fellow at the Hungarian Academy of Sciences, Centre for Social Sciences Institute for Legal Studies. Between 2000 and 2005 he served as a trial judge for criminal cases in Hungary. His main area of research focuses on legal sociology and comparative law with special emphasis on the sociological problems and quality assessment of adjudication. He is the author several books, articles and essays and has been involved in international scientific research cooperations between European countries, aimed at the exploration of problems of adjudication and legislation. He is also an external member of a team at the Hungarian Supreme Court that analyses the judicial practice of Hungarian courts. He has been finishing a European project titled 'Handle with care: assessing and designing methods for evaluation and development of the quality of justice' led by the Research Institute on Judicial Systems - National Research Council of Italy (JUST/2015/JACC/AG/QUAL). He also teaches various subjects including legal sociology, comparative law and comparative legal reasoning.

Dr. Gar Yein Ng is currently a lecturer in law at the University of Buckingham. Her research focuses on court and justice management, public and procedural law (particularly at the intersection between law and technology) from a comparative perspective. She has worked on various research projects including a recent project to review legislation on judicial performance evaluation in Ukraine. Her most recent publications cover issues of cross-border procedures and the application of online solutions, the training of judges and the role of judges with regard to the legislator from a comparative perspective. She has held a number of academic posts throughout Europe and has taught comparative law in the fields of constitutional law and human rights, as well as a range of English law subjects, and French constitutional law. She has also been a visiting researcher at the University of Oslo, MultiRights project (now PluriCourts), University College London, the Institute for Social Sciences of Politics, Cachan, France, the University of Utrecht, Netherlands, and the Research Institute on Judicial Systems – National Research Council of Italy.