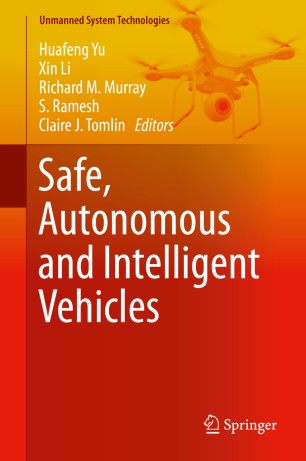 This book covers the start-of-the-art research and development for the emerging area of autonomous and intelligent systems. In particular, the authors emphasize design and validation methodologies to address the grand challenges related to safety. This book offers a holistic view of a broad range of technical aspects (including perception, localization and navigation, motion control, etc.) and application domains (including automobile, aerospace, etc.), presents major challenges and discusses possible solutions.

Huafeng Yu is a senior researcher with Boeing Research & Technology. He is currently working on Safety, Assurance and Certification for Unmanned Aircraft Systems and Self-Driving Vehicles, and is the technical lead for AI safety and assurance in The Boeing Company. Huafeng’s main research interests include formal methods, safety assurance, artificial intelligence, machine learning, model-based engineering, and cyber security. Prior to joining Boeing, he has been working in TOYOTA, ALTRAN, INRIA, Gemplus, and Panasonic. He has experience of more than 15 years on safety research and development in the domains of automobile and aerospace.

Huafeng is currently a member of IEEE Technical Committee on Cybernetics for Cyber-Physical Systems (CCPS) and chair of its industry outreach subcommittee. He has been a member of SAE standard committee for AADL. Huafeng serves as associate editor of IET Journal on Cyber-Physical Systems, guest editor of IEEE Transaction on Sustainable Computing and ACM Transactions on Cyber-Physical Systems. He has served on Program Committees of DAC, DATE, ICCAD, SAC, ICPS, DASC, SmartWorld, ARCH, SLIP, WICSA and CompArch, and AVICPS. Huafeng received his PhD from INRIA and University of Lille 1 (France, 2008) and Master from University Joseph Fourier (France, 2005), both in Computer Science.

Xin Li received the Ph.D. degree in Electrical and Computer Engineering from Carnegie Mellon University, Pittsburgh, PA in 2005, and the M.S. and B.S. degrees in Electronics Engineering from Fudan University, Shanghai, China in 2001 and 1998, respectively. He is currently a Professor in the Department of Electrical and Computer Engineering at Duke University, Durham, NC, and is leading the Institute of Applied Physical Sciences and Engineering (iAPSE) at Duke Kunshan University, Kunshan, Jiangsu, China. In 2005, he co-founded Xigmix Inc. to commercialize his PhD research, and served as the Chief Technical Officer until the company was acquired by Extreme DA in 2007. From 2009 to 2012, he was the Assistant Director for FCRP Focus Research Center for Circuit & System Solutions (C2S2), a national consortium working on next-generation integrated circuit design challenges. He is now on the Board of Directors for R&D Smart Devices (Hong Kong) and X&L Holding (Hong Kong). His research interests include integrated circuit, signal processing and data analytics. Dr. Xin Li is the Deputy Editor-in-Chief of IEEE TCAD. He was an Associate Editor of IEEE TCAD, IEEE TBME, ACM TODAES, IEEE D&T and IET CPS. He served on the Executive Committee of DAC, ACM SIGDA, IEEE TCCPS, and IEEE TCVLSI. He was the General Chair of ISVLSI, iNIS and FAC, and the Technical Program Chair of CAD/Graphics. He received the NSF CAREER Award in 2012, two IEEE Donald O. Pederson Best Paper Awards in 2013 and 2016, the DAC Best Paper Award in 2010, two ICCAD Best Paper Awards in 2004 and 2011, and the ISIC Best Paper Award in 2014. He also received six Best Paper Nominations from DAC, ICCAD and CICC. He is a Fellow of IEEE.

Richard Murray is the Thomas E. and Doris Everhart Professor of Control and Dynamical Systems and Bioengineering at the California Institute of Technology (Caltech). He received the B.S. degree in electrical engineering from Caltech in 1985 and the M.S. and Ph.D. degrees in electrical engineering and computer sciences from the University of California, Berkeley, in 1988 and 1991, respectively. He joined the Caltech faculty in Mechanical Engineering in 1991 and helped found the Control and Dynamical Systems program in 1993. In 1998–1999, he took a sabbatical leave and served as the director of Mechatronic Systems at the United Technologies Research Center, Hartford, Connecticut. Upon returning to Caltech, he served as the division chair (dean) of Engineering and Applied Science from 2000 to 2005, the director for Information Science and Technology from 2006 to 2009, and interim division chair from 2008 to 2009. He received the Donald P. Eckman Award in 1997, the IFAC Harold Chestnut Textbook Prize (with Karl Åström) in 2011, and the IEEE Bode Lecture Prize in 2016 and is an elected member of the National Academy of Engineering (2013). His research is in the application of feedback and control to networked systems, with applications in biology and autonomy. Current projects include the analysis and design of biomolecular feedback circuits, the synthesis of discrete decision- making protocols for reactive systems, and the design of highly resilient architectures for autonomous systems. He is a cofounder of Synvitrobio, Inc., a cell-free synthetic biology company in San Francisco, and a member of the Defense Innovation Board, which advises the U.S. Secretary of Defense.

Ramesh S, has been with General Motors Global R&D in Warren, MI, where he currently holds the position of Senior Technical Fellow and thrust area lead for model based embedded software.  At General Motors, he is responsible for providing technical leadership for research and development in several areas related to Electronics, Control & Software processes, methods, and tools.

Earlier he was in India Science Lab serving as the lab group manager for two research groups on Software and System Verification and Validation.  During this time, he led several projects on next generation rigorous verification and testing methods for control software which resulted in proof of concept methods and tools that were piloted on several SW subsystems across

Prior to joining GM R&D, he was on the faculty of the department of Computer Science & Engineering at IIT Bombay, for more than fifteen years. At IIT Bombay, he played a major role in setting up a National Centre for Formal Design and Verification of Software.  As the founding head of this Centre, he carried out many projects on verification of embedded software, for several Government organizations. He is a fellow of the Indian National Academy of Engineering and was visiting/adjunct faculty of many institutions.

Claire J. Tomlin is a professor of electrical engineering and computer sciences at the University of California at Berkeley, where she holds the Charles A. Desoer Chair in Engineering. She was assistant, associate, and full professor at Stanford (1998–2007) and joined Berkeley in 2005. She has been an affiliate at Lawrence Berkeley National Laboratory in the Life Sciences Division since January 2012. She works in hybrid systems and control, with applications to air traffic and unmanned air vehicle systems, robotics, energy, and biology.

Dr. Tomlin pioneered methods for computing the reachable set to encompass all behaviors of a hybrid system, which makes it possible to verify that the system stays within a desired safe range of operation and to design controllers to satisfy constraints. She has applied these methods to collision avoidance control for multiple aircraft, and to the analysis of switched control protocols in avionics and embedded controllers in aircraft.

Her work has been tested in simulation and UAV test flights, and applied to and flown on two large commercial platforms: (1) Boeing aircraft: Her method was used to compute collision zones for two aircraft paired approaches, and was flown on a Boeing T-33 test aircraft, flying close to a piloted F-15. The F-15 pilot flew “blunders” into the path of the T-33, which used Tomlin’s algorithm to avoid collision. (2) Driven on Scania trucks: Dr. Tomlin’s method was used to derive a minimum safe distance between transport trucks driving in high-speed platoons for fuel savings, and revealed that the relative distance used today can be reduced significantly with this automation. Her work is also being considered for application in the Next Generation Air Transportation System (NextGen) and in Unmanned Aerial Vehicle Traffic Management (UTM).

Dr. Tomlin is a MacArthur Foundation, IEEE, and AIMBE fellow. She has received the Donald P. Eckman Award of the American Automatic Control Council in 2003, the Tage Erlander Guest Professorship of the Swedish Research Council in 2009, an honorary doctorate from KTH in 2016, and in 2017 the IEEE Transportation Technologies Award.