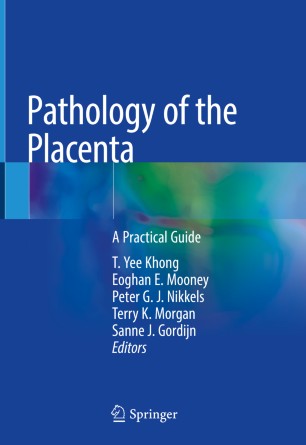 Pathology of the Placenta

This book provides a comprehensive resource on the pathology of the human singleton placenta. Agreed nomenclature, nosology, definitions and, where possible, thresholds for meaningful clinical corrections for lesions ideal for practical application in clinical practice are presented. Evidence is also featured on relevant potential clinical correlations to aid the reader in deciding upon the most appropriate management strategy. Areas of current uncertainty are also covered for potential future research.

Pathology of the Placenta systematically describes placental pathology, and represents a valuable resource for practising and trainee pathologists, obstetricians, neonatologists and epidemiologists.

Dr. T. Yee Khong, MBChB, MD, MSc, FRCPath, FRCPA, FAMM, GAICD, is a Consultant Pathologist at SA Pathology, Women’s and Children’s Hospital, Adelaide, Australia. He qualified in medicine from University of Sheffield, UK and did his pathology training at St George’s Hospital Medical School, London and John Radcliffe Hospital, Oxford, UK. He is Professor of Pathology and Obstetrics & Gynaecology, at the University of Adelaide and a former President of the Royal College of Pathologists of Australasia.
Dr. Eoghan Mooney, MBChB, MRCPI, FRCPath, FFPath (RCPI), was born in Dublin, Ireland, where he now lives and works. He is a graduate of the National University of Ireland (University College Dublin). Following pathology training in Dublin and in Duke University, North Carolina, USA he completed his Fellowship in Gynaecologic and Breast pathology in the Armed Forces Institute of Pathology, Washington DC. He has been a consultant pathologist for 17 years, based in the National Maternity Hospital and St Vincent’s University Hospital and has published in the area of placental pathology for 20
years.
Dr. Peter G.J. Nikkels, MD, PhD, is a staff member in the Department of Pathology, University Hospital Utrecht, the Netherlands. He qualified in medicine from Erasmus University Rotterdam, the Netherlands and did his pathology training at the Department of Pathology, University Hospital Groningen, the Netherlands where he became a consultant pathologist. He has published extensively in placental pathology.
Dr. Terry K. Morgan, MD, PhD, completed residency training, a surgical pathology fellowship and cytopathology fellowship at Stanford University Medical Center. He is Associate Professor of Pathology and Obstetrics & Gynecology, at the Oregon Health & Science University. He is the director of placental pathology and the focus of his research laboratory is to determine how abnormal blood flow to the placenta leads to common maternal pregnancy complications and fetal programming of adult onset disease in their
progeny.
Dr. Sanne J Gordijn, MD, PhD, completed her residency training in
University of Groningen, the Netherlands and is a consultant in obstetrics with
a special interest in perinatology. Her research interests are in perinatal
autopsy, placental pathology and classification of perinatal mortality.

“This book is intended as a resource for practicing anatomic pathologists in a community or academic hospital setting. As the book provides significant correlation between macroscopic and microscopic findings, it is excellent for pathology residents and/or fellows who may both gross and microscopically evaluate a placental specimen. Additionally, it may serve as an additional reference for clinical obstetricians or pediatricians specializing in neonatology.” (Lauren Stanoszek, Doody's Book Reviews, July 26, 2019)
Buy options