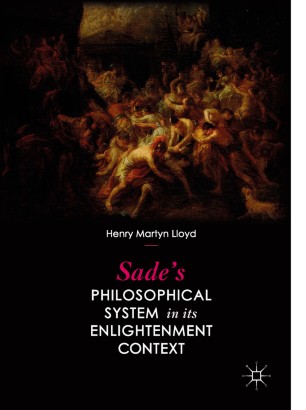 This book connects the philosophy of the Marquis de Sade—one of the most notorious, iconic, and yet poorly-understood figures within the history of European thought—with the broader themes of the Enlightenment. Rather than seeing himself as a mere pornographer, Sade understood himself as continuing the progressive tradition of French Enlightenment philosophy. Sade aspired to be a philosophe. This book uses intellectual history and the history of philosophy to reconstruct Sade’s philosophical ‘system’ and its historical context. Within the period’s discourse of sensibility Sade draws on the philosophical and the literary to form a relatively sophisticated ‘system’ which he deploys to critically engage with the two major strands of eighteenth-century ethical theory: the moral sense and natural law traditions. This work is of interest to: ‘Continental’ Philosophy, Critical Theory, French Studies, the History of Eighteenth-Century Philosophy, Literary Studies, the History of Moral Philosophy, and Enlightenment Studies.

“Henry Martyn Lloyd’s richly textured, historically informed, and philosophically astute study succeeds where others have failed in situating Sade’s notorious corpus of works within the broader landscape of eighteenth-century thought.  By laying out the ways in which his peculiar mélange of literature and philosophy was a response to the positions staked out by Rousseau, Condillac, d’Holbach, and other, less familiar contemporaries, Lloyd allows us to see Sade as an informed — albeit often idiosyncratic — participant in the arguments and approaches that shaped the late Enlightenment.  The result is an insightful and engaging account of a thinker who was neither a stranger to the concerns of the Enlightenment nor a symptom of its alleged pathologies.” (Prof. James Schmidt, Boston University, USA)
Buy options