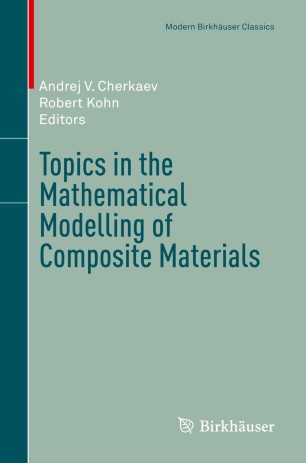 Topics in the Mathematical Modelling of Composite Materials

Over the past several decades, we have witnessed a renaissance of theoretical work on the macroscopic behavior of microscopically heterogeneous materials. This activity brings together a number of related themes, including: (1) the use of weak convergence as a rigorous yet general language for the discussion of macroscopic behavior; (2) interest in new types of questions, particularly the "G-closure problem," motivated in large part by applications of optimal control theory to structural optimization; (3) the introduction of new methods for bounding effective moduli, including one based on "compensated compactness"; and (4) the identification of deep links between the analysis of microstructures and the multidimensional calculus of variations. This work has implications for many physical problems involving optimal design, composite materials, and coherent phase transitions. As a result, it has received attention and support from numerous scientific communities, including engineering, materials science, and physics, as well as mathematics. There is by now an extensive literature in this area. But for various reasons certain fundamental papers were never properly published, circulating instead as mimeographed notes or preprints. Other work appeared in poorly distributed conference proceedings volumes. Still other work was published in standard books or journals, but written in Russian or French. The net effect is a sort of "gap" in the literature, which has made the subject unnecessarily difficult for newcomers to penetrate. The present, softcover reprint is designed to make this classic text available to a wider audience.

"Summarizes some of the fundamental results achieved and offers new perspectives in the mechanics of composite and micromechanics... Will become a classic in the two fields."