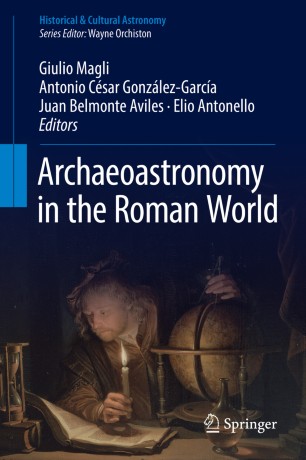 Archaeoastronomy in the Roman World

This book explores the insights that Cultural Astronomy provides into the classical Roman world by unveiling the ways in which the Romans made use of their knowledge concerning the heavens, and by shedding new light on the interactions between astronomy and heritage in ancient Roman culture. Leading experts in the field present fascinating information on how and why the Romans referred to the sky when deciding upon the orientation of particular monuments, temples, tombs and even urban layouts. Attention is also devoted to questions of broader interest, such as the contribution that religious interpretation of the sky made in the assimilation of conquered peoples.
When one considers astronomy in the Roman world it is customary to think of the work and models of Ptolemy, and perhaps the Julian calendar or even the sighting of the Star of Bethlehem. However, like many other peoples in antiquity, the Romans interacted with the heavens in deeper ways that exerted a profound influence on their culture. This book highlights the need to take this complexity into account in various areas of research and will appeal to all those who wish to learn more about the application of astronomy in the lives and architecture of the Romans.

Giulio Magli is a prominent physicist and currently a Professor at the Politecnico of Milan, where he is also Dean of the Department of Mathematics. Dr. Magli’s initial research focus was in the field of relativistic astrophysics, but since 1999 his attention has gradually shifted to archaeoastronomy, and especially the relationship between architecture, landscape, and the mathematical-astronomical lore of ancient cultures. He is one of the authors of the UNESCO-IAU document on astronomical heritage and has written several previous books, including most recently Archaeoastronomy - Introduction to the Science of Stars and Stones (Springer 2016). Dr. Magli has been a visiting scientist at several institutions outside Italy and regularly presents talks at national and international meetings. His research has been the subject of two CNN documentaries broadcast to a worldwide audience.

Antonio César González-García holds a PhD in Astronomy from the University of Groningen, the Netherlands, and currently works as a Ramón y Cajal fellow at the Institute of Heritage Sciences (Incipit) of the Spanish National Research Council (CSIC) in Santiago de Compostela. Prior to taking up his present post, he held postdoctoral positions at the Instituto de Astrofísica de Canarlas (IAC, La Laguna, Tenerife, Spain; 2003–6) and the Theoretical Physics Department of the Autonomous University of Madrid (2006–10). Dr. González-García’s main research area is Cultural Astronomy, while within Astrophysics his focus has been on the formation and evolution of galaxies as studied through N-body computer simulations. He is the present Secretary of the European Society for Astronomy in Culture (SEAC, 2014–).

Juan Antonio Belmonte is a Research Professor of Astronomy at the Instituto de Astrofísica de Canarias (Tenerife, Spain), where he lectures on the history of astronomy and archaeoastronomy and investigates exoplanets, stellar physics, and cultural astronomy. He has published or edited a dozen books and authored nearly 200 publications on these subjects. He was Director of the Science and Cosmos Museum of Tenerife from 1995 to 2000, and President of the European Society for Astronomy in Culture (SEAC) from 2005 to 2011. In 2010 he received SEAC’s Carlos Jaschek Award for his contributions to the discipline. An advisory editor of the Journal for the History of Astronomy, in recent years he has undertaken extensive research into the astronomical traditions of ancient civilizations.

Elio Antonello is an astronomer at the INAF-Brera Astronomical Observatory. He has conducted extensive research in theoretical and observational stellar astrophysics and in the field of space technologies. He is President of the Italian Society for Archaeoastronomy, an association devoted to Cultural Astronomy, i.e., the study of the importance of sky gazing in every society and epoch. He is interested in the astronomical effects on the climate and the consequent impact on the history of human evolution and societies.