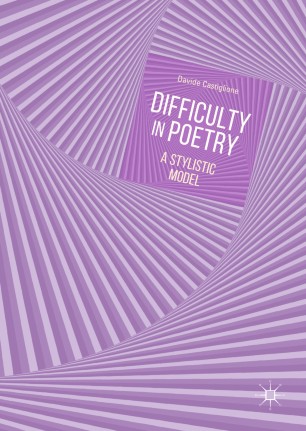 This book theoretically defines and linguistically analyses the popular notion that poetry is ‘difficult’ - hard to read, hard to understand, hard to engage with. It is the first work to offer a stylistic and cognitive model that sheds new light on the mechanisms of difficulty, as well as on its range of potential effects. Its eight chapters are organised into two thematic parts. The first traces the history of difficulty, surveys its main scholarly traditions, addresses related themes – from elitism to obscurity, from abstraction to intentionality – and introduces a wide array of analytical tools from literary theory and cognitive psychology. These tools are then consistently applied in the second part, which includes several extended analyses of poems by canonical modernists such as Ezra Pound, Wallace Stevens and Hart Crane, alongside those of postmodernist innovators such as Geoffrey Hill, Susan Howe and Charles Bernstein, among others. This innovative work will provide fresh insights and approaches for scholars of stylistics, literary studies, cognitive poetics and psychology.