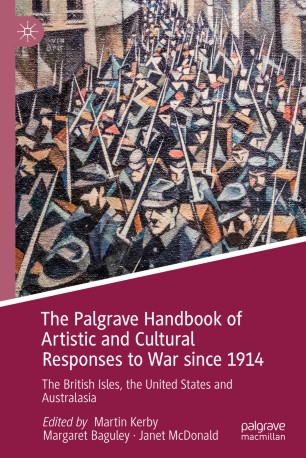 The British Isles, the United States and Australasia

This handbook explores a diverse range of artistic and cultural responses to modern conflict, from Mons in the First World War to Kabul in the twenty-first century. With over thirty chapters from an international range of contributors, ranging from the UK to the US and Australia, and working across history, art, literature, and media, it offers a significant interdisciplinary contribution to the study of modern war, and our artistic and cultural responses to it. The handbook is divided into three parts. The first part explores how communities and individuals responded to loss and grief by using art and culture to assimilate the experience as an act of survival and resilience. The second part explores how conflict exerts a powerful influence on the expression and formation of both individual, group, racial, cultural and national identities and the role played by art, literature, and education in this process. The third part moves beyond the actual experience of conflict and its connection with issues of identity to explore how individuals and society have made use of art and culture to commemorate the war. In this way, it offers a unique breadth of vision and perspective, to explore how conflicts have been both represented and remembered since the early twentieth century.

Martin Kerby is Senior Lecturer at the University of Southern Queensland, Australia. His research areas encompass both educational and historical areas. He recently received a USQ Publication Excellence Award for Sir Philip Gibbs and English Journalism in War and Peace (Palgrave Macmillan, 2016) and is the current Editor of Australian Art Education.
Margaret Baguley is Associate Professor in Arts Education, Curriculum and Pedagogy at the University of Southern Queensland as well as the President of Art Education Australia. She has recently co-edited The Palgrave International Handbook of Global Arts Education with Georgina Barton (Palgrave Macmillan, 2017).
Janet McDonald is Associate Professor of Drama and Theatre Studies in the School of Arts and Communication at the University of Southern Queensland, Australia. Her research areas include actor-training and wellbeing, localism and wellbeing, and liminal arts practices in regional areas which features prominently her in published book Creative Communities: Regional Inclusion in the Arts (2015), co-edited with Robert Mason.