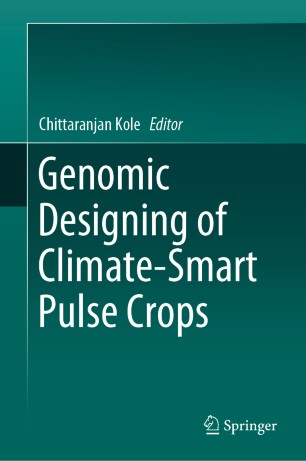 This book describes the concepts, strategies and techniques for pulse- crop improvement in the era of climate change, highlighting the latest advances in plant molecular mapping and genome sequencing.

Genetic mapping of genes and QTLs has broadened the scope of marker-assisted breeding and map-based cloning in almost all major pulse crops. Genetic transformation, particularly using alien genes conferring resistance to herbicide, insects and diseases has facilitated the development of a huge number of genetically modified varieties of the major pulse crops. Since the genome sequencing of rice in 2002, genomes of over 7 pulse crops have been sequenced. This has resulted in the possibility of deciphering the exact nucleotide sequence and chromosomal positions of agroeconomic genes. Most importantly, comparative genomics and genotyping-by-sequencing has opened up a new vista for exploring wild crop relatives for identification of useful donor genes.

Prof. Chittaranjan Kole is an internationally reputed scientist with an illustrious professional career spanning over thirty-three years with original contributions in the fields of plant genetics, genomics, biotechnology and molecular breeding leading to the publication of more than 160 research articles. He has edited over 90 books for leading publishers of the world including Springer, Wiley-Blackwell and Taylor and Francis Group. His works and editing acumen have been appreciated worldwide by several pioneering scientists, including seven Nobel Laureates, for their impact on science and society. Prof. Kole is also the  Founding Principal Coordinator  of the International Climate-Resilient Crop Genomics Consortium and the International Consortium for Phytomedomics and Nutriomics.