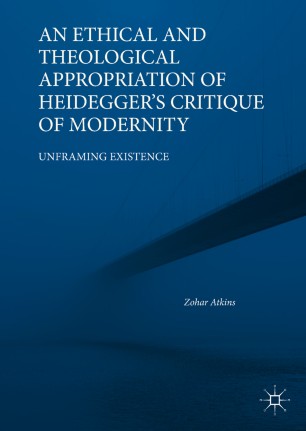 An Ethical and Theological Appropriation of Heidegger’s Critique of Modernity

This book is at once a deeply learned and original reading of Heidegger and a primary text in its own right. It demonstrates the relevance of Heidegger’s thought in responding to the moral and religious challenges of 21st century existence. It shows that Heidegger’s project can be defended against many criticisms once its existential character is taken seriously. What emerges is a powerful exercise in thinking, not about Heidegger, but with and against him. As such, Atkins engages Heidegger as a means of advancing a defense of spirituality in the modern world that holds spirituality itself accountable for its lapses into the mundane. Addressing the most influential figures in recent Continental philosophy, such as Emmanuel Levinas and Theodor W. Adorno, this is a work that will be of timely use to philosophers, theologians, artists, and seekers.

Zohar Atkins is the founder of Etz Hasadeh and a Fellow at the Shalom Hartman Institute of North America. He holds a DPhil in Theology from Oxford, where he was a Rhodes Scholar, and rabbinic ordination from the Jewish Theological Seminary of America. He is the author of Nineveh (2019).

“Zohar Atkins’ first book is a generous, poetic, and spiritually insightful venture in thinking further some of the big themes of Heidegger's thought. As Atkins several times emphasizes, it is not an exercise in simple commentary, although he is highly conversant in the often acrimonious literature surrounding this most controversial of twentieth century thinkers. Fully aware of the reasons why many believe Heidegger has nothing to say to the religious crisis of our own time, Atkins draws from the German philosopher's thought an ethics and poetics of Being that is also profoundly religious in ways that resonate with the best of modern Jewish and Christian thought. It is a work of thinking and a work of prayer, to be read with the mind and with the heart.” (George Pattison, University of Glasgow, UK)

“An Ethical and Theological Appropriation of Heidegger’s Critique of Modernity is a bold attempt to elicit from Heidegger an ethics that will speak ecumenically to both theists and non-theists. At the basis of Atkins’ innovative reading of Heidegger is understanding Dasein’s task of letting the truth of being be manifest in the world as a covenantal phenomenology. Such an interpretation endows the poetological with ethical and theological import. Indeed, the author provocatively challenges the common charge, spearheaded by Levinas, that Heidegger privileged ontology over and above ethics and theology, asserting instead that Heidegger’s thought is an injunction to conduce ethics and theology in a nonmetaphysical manner. I am confident that this book will open new paths of thinking for Heideggerian scholars and for all those interested in the relevance and viability of a philosophy of religion confronting the challenges of modernity.” (Elliot R. Wolfson, University of California, Santa Barbara, USA)