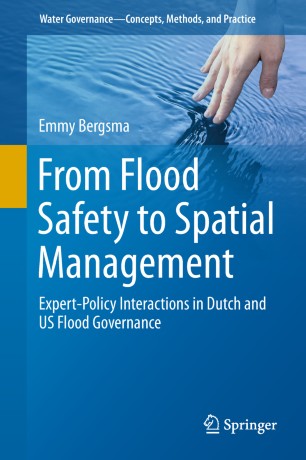 From Flood Safety to Spatial Management

Expert-Policy Interactions in Dutch and US Flood Governance

This book deals with the introduction of a new type of “spatial measures" in flood governance. In contrast to traditional “safety measures" that aim to provide protection against floods by building structural flood defenses such as levees and flood walls, the goal of spatial measures is to reduce the exposure to flood risks by changing the spatial layout of flood-prone areas. By limiting developments and flood-proofing buildings in areas at risk to flooding, investments in structural flood defenses can be circumvented and vulnerabilities reduce. World-wide, spatial measures are gaining attractiveness as a response strategy to increasing flood risks caused by climate change and urbanization.
The introduction of spatial measures in flood governance involves more than the simple development of new policies and laws. Research has demonstrated that the implementation of spatial measures can have huge implications for how costs and responsibilities are divided between different levels of governance and between public and private actors, changing the whole organization behind flood governance. Both for the effectiveness and for the legitimacy of spatial flood governance strategies, it is important that these distributive implications are well understood.
This book describes the introduction of spatial measures in the context of two very different delta countries: the Netherlands and the United States. In the United States, a spatial flood governance strategy was already developed in de mid-20th century whereas in the Netherlands, a safety paradigm institutionalized over the course of the 20th century and spatial measures have only recently been introduced. By analyzing the science-policy interactions underlying the implementation of spatial measures in both countries, this book shows how under the influence of different types of experts (engineers in the Netherlands and social geographers in the United States) different spatial flood management strategies emerged with different distributive implications, each with its own challenges for effectiveness and legitimacy.