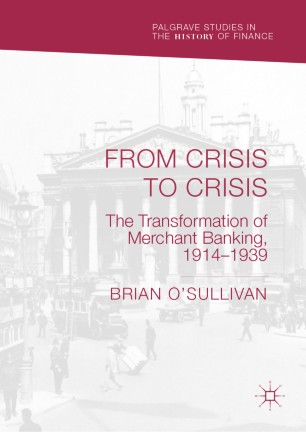 From Crisis to Crisis

From Crisis to Crisis examines the impact of the harsh conditions of the interwar economy on the British merchant banks.  The financial crises of 1914 and 1931 are assessed using primary sources. The competitive threats, including the rise of New York as a rival financial centre, are considered. It challenges alleged special treatment and provides fresh perspectives on the interwar rationalisation of industry.

During the late nineteenth century, Britain’s merchant banks had become pre-eminent in a world of fixed exchange rates, free trade and the unfettered mobility of international capital. This world was increasingly challenged in the interwar period, being replaced by floating exchange rates, trade protectionism and restrictions on capital movements.

This book fills a gap in the historiography of British banking by recovering the histories of long-forgotten merchant banks rather than focusing on the better-known firms. Using a wide range of archival resources, it traces the strategic transformation by some merchant banks from higher-risk, capital intensive activities to lower-risk, advisory services.

Brian O’Sullivan is a Visiting Research Fellow at King’s College, London, UK. He completed his PhD in 2015 at Birkbeck College, London, UK. He has spent most of his career in the asset management industry, including time with two merchant banks: Guinness Mahon and Schroders. He is currently Chief Operating Officer of Thomas Miller Investment. Previously he was a Senior Vice President at State Street Bank. He is a Fellow of the Institute of Chartered Accountants.

“British merchant banks bestrode the world before the First World War—and the City of London revived with the emergence of the Eurodollar market from the late 1950s. The interwar period has been overlooked, often seen as an interlude of stasis or decline. But Brian O’Sullivan’s excellent book draws on pioneering research to show how change was taking place that provided the basis of much that came later. This book is a major contribution to the financial history of the City of London.” (Martin Daunton, Emeritus Professor of Economic History, University of Cambridge, UK)

“I am delighted to see this outstanding research published as a companion to my own book. I warmly commend it to everyone fascinated by the history and current state of the city of London.” (Stanley Chapman, Emeritus Professor of Business History at the University of Nottingham; author of The Rise of Merchant Banking, UK)

“Original and timely—this important study follows merchant banks through the interwar crisis to raise profound questions about risk and regulation that remain with us to this day.” (Frank Trentmann, Professor of History at Birkbeck, University of London, UK)