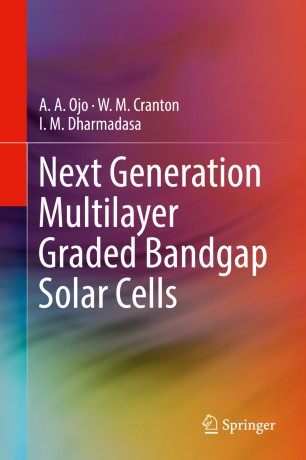 This book will guide Photovoltaics researchers in a new way of thinking about harvesting light energy from all wavelengths of the solar spectrum. It closes the gap between general solar cells books and photovoltaics journal articles, by focusing on the latest developments in our understanding of solid-state device physics. The material presented is experimental and based on II-VI thin-film materials, mainly CdTe-based solar cells. The authors describe the use of new device design, based on multilayer graded bandgap configuration, using CdTe-based solar cells. The authors also explain how the photo-generated currents can be enhanced using multi-step charge carrier production. The possibility of fabricating these devices using low-cost and scalable electroplating is demonstrated. The value of electroplating for large area electronic devices such as PV solar panels, display devices and nano-technology devices are also demonstrated.  By enabling new understanding of the engineering of electroplated semiconductor materials and providing an overview of the semiconductor physics and technology, this practical book is ideal to guide researchers, engineers, and manufacturers on future solar cell device designs and fabrications.

A. A. Ojo is a Researcher with a Ph.D. degree in Renewable Energy Engineering and a member of the Electronic Materials and Solar Energy Group, Sheffield Hallam University, UK. He has worked on renewable energy material engineering and associated technologies during his B.Eng. (Mechanical and Material Engineering) and MSc. (Adv. Engineering and Management) degree programs. His interest in alternate energy sources such as solar energy was due to its abundance in the tropic regions such as his motherland (Nigeria). His Ph.D. work was centered on renewable energy material engineering, electrodeposition, fabrication and the embedded technology of thin film solar cells. He has continued this area of research on joining Sheffield Hallam University in 2014 under the supervision of Prof. I. M. Dharmadasa. Ojo has published over 20 refereed and conference papers and has made a book contribution.

Wayne Cranton is a Professor of Visual Technology at Sheffield Hallam University, and Assistant Dean, Research and Business Development for the Faculty of Arts, Computing, Engineering and Sciences. His research is concerned with the study of thin film materials for electronic devices, displays, sensors, and light emitting devices. This has involved a number of collaborative applied research and development programmes on the deposition and processing of light emitting materials, dielectrics, and metal oxide semiconductors, with recent emphasis on the localised photonic processing of materials for low temperature fabrication of flexible electronics and displays.  Much of Wayne’s work builds from the development of techniques to fabricate and process materials for electroluminescent displays, optimising electro-optical functionality through deposition and laser processing.  As a founding partner of the DisplayMasters Inter-University Programme in the UK, Wayne was part of the team that brought together display experts and students from around the globe, and which became the catalyst for the collaborations resulting in the Springer Handbook of Visual Display Technology. Professor Cranton has published over 50 articles on the physics and engineering of materials for electronic device applications.

I. M. Dharmadasa is a Senior Staff Grade Professor of Electronic Materials and Devices at Sheffield Hallam University in the UK and Head of the Electronic Materials & Sensors Research Group. He graduated from the Univ. of Peradeniya in 1972, and completed his PhD thesis during 1977-1980 at the Univ. of Durham after winning an open C/W scholarship. After working as a lecturer at Peradeniya, he returned to the UK in 1984 due to his deep research interest in solar energy conversion, and worked at Univ. College Cardiff and the British Petroleum Company (BP), before joining Sheffield Hallam University in 1990. He has published over 200 scientific articles in addition to a single authored book on "Advances in Thin Film Solar Cells" and six patents. He is currently serving in the academic advisors' panel of the Commonwealth Scholarship Commission in the UK, and solar energy panel at the European Commission.