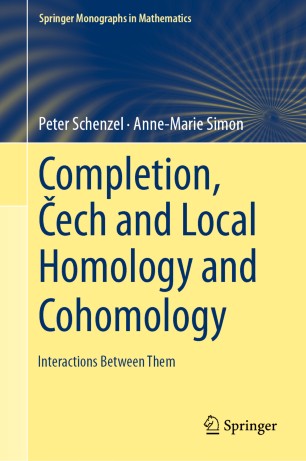 The aim of the present monograph is a thorough study of the adic-completion, its left derived functors and their relations to the local cohomology functors, as well as several completeness criteria, related questions and various dualities formulas. A basic construction is the Čech complex with respect to a system of elements and its free resolution. The study of its homology and cohomology will play a crucial role in order to understand left derived functors of completion and right derived functors of torsion. This is useful for the extension and refinement of results known for modules to unbounded complexes in the more general setting of not necessarily Noetherian rings.

The book is divided into three parts. The first one is devoted to modules, where the adic-completion functor is presented in full details with generalizations of some previous completeness criteria for modules. Part II is devoted to the study of complexes. Part III is mainly concerned with duality, starting with those between completion and torsion and leading to new aspects of various dualizing complexes.

The Appendix covers various additional and complementary aspects of the previous investigations and also provides examples showing the necessity of the assumptions.

Peter Schenzel retired from Martin Luther University Halle-Wittenberg in 2015. There, he gained his PhD in 1975, under the supervision of Wolfgang Vogel and his Habilitation in 1979. The latter was published in the Springer Lecture Notes in Mathematics. He published further more than 90 research papers. He was invited and speaker of several international conferences. For three years he was a member of the Max Planck Institute for Mathematics.

Anne Marie Simon is professor at the Free University of Brussels. She received her PhD, under the guidance of Jacques Tits at the same university in 1969. She was a visitor at Brown University for one year. She published more than 20 research papers. At least two of them dealt with the study of completion and local homology and have been quoted in several research papers.