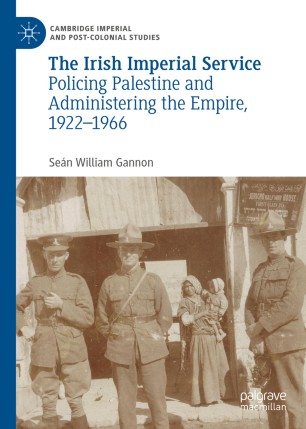 Policing Palestine and Administering the Empire, 1922–1966

This book explores Irish participation in the British imperial project after ‘Southern’ Ireland’s independence in 1922. Building on a detailed study of the Irish contribution to the policing of the Palestine Mandate, it examines Irish imperial servants’ twentieth-century transnational careers, and assesses the influence of their Irish identities on their experience at the colonial interface. The factors which informed Irish enlistment in Palestine’s police forces are examined, and the impact of Irishness on the personal perspectives and professional lives of Irish Palestine policemen is assessed. Irish policing in Palestine is placed within the broader tradition of the Royal Irish Constabulary (RIC)-conducted imperial police service inaugurated in the mid-nineteenth century, and the RIC’s transnational influence on twentieth-century British colonial policing is evaluated. The wider tradition of Irish imperial service, of which policing formed part, is then explored, with particular focus on British Colonial Service recruitment in post-revolutionary Ireland and twentieth-century Irish-imperial identities.