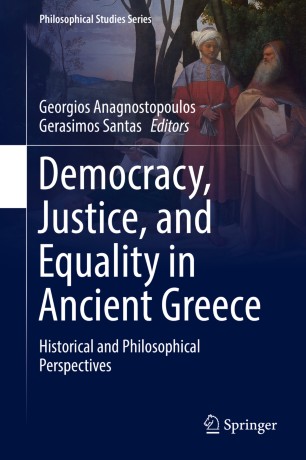 The original essays in this volume discuss ideas relating to political justice, distributive justice and addressing inequalities. These issues were as vigorously debated at the height of ancient Greek democracy as they are in many democratic societies today. Through perspectives from ancient Greece, contributing authors address topics relating to democracy, equality, justice, and other public goods, and they critically examine both the ancient debates and their historical context.

Readers will discover research on the lessening of economic inequality during the Athenian democracy, and consideration of Plato’s critique of Greek participatory democracies. Early chapters look at Plato’s proposals such as abolition of private property for the ruling classes and his ideal constitution. Other papers discuss Socrates or Aristotle’s views that are particularly relevant to contemporary political and economic disputes about freedom, slavery, the status of women, and public education, to name a few. This thorough consideration of the ancient Greeks' work on democracy and equality will appeal to scholars and researchers of the history of philosophy, as well as those with an interest in political philosophy.

Georgios Anagnostopoulos is a Professor of Philosophy at the University of California, San Diego.  He works primarily on ancient Greek philosophy, and is the author of Aristotle on the Goals and Exactness of Ethics and editor of The Blackwell Companion to Aristotle and of two collections of essays on ancient Greek philosophy in Springer’s Philosophical Studies Series.

Gerasimos Santas is Professor of Philosophy Emeritus, University of California, Irvine. His books include Socrates, Plato and Freud, Goodness and Justice, Understanding Plato’ Republic, The Blackwell Guide to Plato’ Republic (ed.). His current interests include economic inequalities and democratic justice in ancient and modern times.