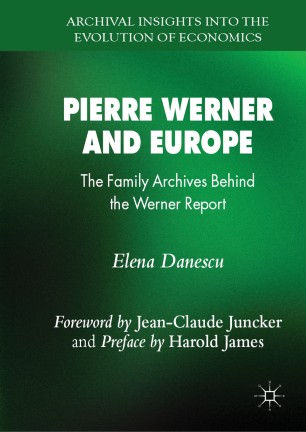 The Family Archives Behind the Werner Report

This book examines  the European vocation and achievements of Pierre Werner (1913–2002), former Prime Minister, Finance Minister and Foreign Minister of Luxembourg, unanimously recognized as one of the architects of Economic and Monetary Union. The author makes extensive use of Pierre Werner’s previously unpublished archives belonging to the Werner family, opened for the first time for research purposes. The book analyses the Werner Report, negotiations within the Werner Committee, the emergence of the Committee’s views on EMU, their political commitment to a European currency, the similarities and differences between their ideas, their personal networks, the influence of the states they represented, their theoretical and methodological input and their contribution to the political consensus.

Chapters shed new light on various aspects of the European integration process and also on the role of Luxembourg and its European policy. In addition, the author has carried out a series of original interviews with Luxembourg and European figures who share their memories and thoughts concerning Pierre Werner, his achievements and his views on the European integration process, and also other topics such as Economic and Monetary Union and Luxembourg‘s European policy.

This book will be of interest and value to researchers, EU policy makers and students in the fields of political economy, political science, economic history and history of economic thought.

Elena Danescu is an internationally renowned expert on the work and achievements of Pierre Werner. She is a Research Scientist at the Luxembourg Centre for Contemporary and Digital History. She holds a PhD in Political Economics from the National Institute of Economic Research (INCE). She is Fellow of Robert Schuman Institute of European Affairs and joined the University of Luxembourg in 2016 and has been involved in several international projects focusing on European integration history and the role of Luxembourg and its elites in the European integration process, in EMU and in EU governance.