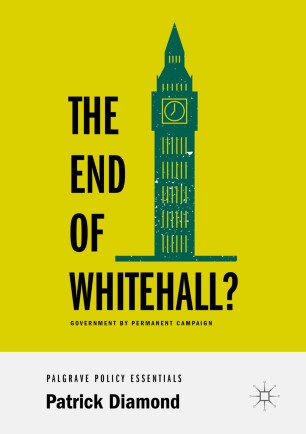 The End of Whitehall?

This Palgrave Policy Essential maps and assesses key changes in the Whitehall model over the last two decades. It argues that the traditional Whitehall model is being replaced by a system of ‘New Political Governance’ (NPG) centred on politicised campaigning; the growth of political advisory staff relative to the permanent civil service; the personalisation of bureaucratic appointments; and the creation of a government machine that is ‘promiscuously partisan’. It provides a snapshot of the institutional changes that are unfolding at a critical moment while addressing a series of long-term structural challenges from the demographic pressures of the ageing society to the impact of climate change.Patrick Diamond is Senior Lecturer in Public Policy at Queen Mary, University of London, UK. Patrick held a number of senior posts in British central government between 2000 and 2010, and was formally Head of Policy Planning in 10 Downing Street. He was a local councillor in the London Borough of Southwark, and is Chair of the think-tank Policy Network, a member of the Advisory Board of the Social Market Foundation, and sits on the Scientific Council of the Foundation for European Progressive Studies. Patrick has contributed op-ed articles to the Financial Times, the Guardian, the Independent, the Wall Street Journal, the Times Educational Supplement, the New Statesman, Progress, Renewal, and Tribune. He comments regularly on numerous national media outlets, and has given interviews on the BBC Radio Today programme, the Westminster Hour, Start the Week, Newsnight, Sky News with Adam Boulton, and CNBC news.