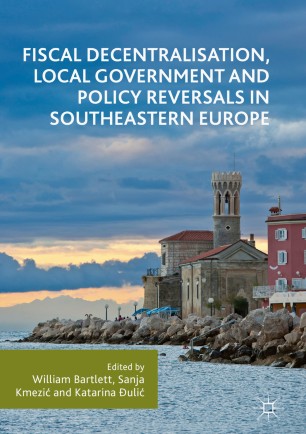 This edited collection provides a comprehensive geographic and chronological overview of the decentralisation processes in the successor states of former Yugoslavia and Albania during their transition and EU integration years, from 1990 until 2016. These countries present a unique laboratory for the analysis of economic, social and political change, having traversed armed conflicts, dramatic economic and political changes, and EU pre-accession processes involving deep institutional reform. They have also endured the Eurozone crisis, which has led to high levels of unemployment, wide fiscal gaps and dangerously high levels of indebtedness.

Observing the quarter century-long transition from socialism to capitalism through the prism of decentralisation sheds new light on studying the political economy of the region and the current status of the individual countries in terms of economic development and their EU integration progress. The contributors enrich the wider literature on fiscal decentralisation in transition countries by exploring several broad questions on democratisation, the political economy of post-communist transition, the role of external actors in policy transfer and the issue of financial stability in the post-crisis period.

William Bartlett is Visiting Senior Research Fellow at the London School of Economics and Political Science, UK. He is coordinator of the LSEE Research Network on Social Cohesion in South East Europe and has carried out numerous research and consultancy projects, including those for the European Commission, the European Parliament, the Council of Europe, the European Training Foundation, UNDP and UNICEF.

Sanja Kmezić is Lecturer at the Karl Franzens University of Graz, Austria. Kmezić is a co-founder of the non-profit think tank European Research Academy Belgrade (EURAK), Serbia and has worked as an advisor on various international development programmes aimed at local government and public administration reform.

Katarina Đulić is Associate Professor at the Faculty of Economics, Finance and Administration in Belgrade, Serbia. She is also a co-founder of EURAK and has carried out numerous consultancy projects for the International Finance Corporation, USAID and SECO aimed at governance and public financial management reform.