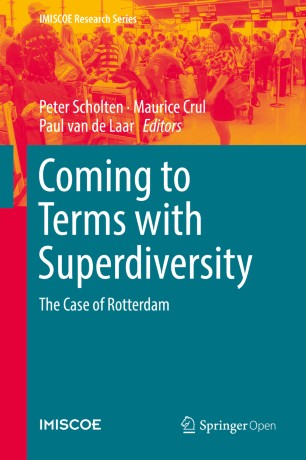 The Case of Rotterdam

This open access book discusses Rotterdam as clear example of a superdiverse city that is only reluctantly coming to terms with this new reality. Rotterdam, as is true for many post-industrial cities, has seen a considerable backlash against migration and diversity: the populist party Leefbaar Rotterdam of the late Pim Fortuyn is already for many years the largest party in the city. At the same time Rotterdam has become a majority minority city where the people of Dutch descent have become a numerical minority themselves. The book explores how Rotterdam is coming to terms with superdiversity, by an analysis of its migration history of the city, the composition of the migrant population and the Dutch working class population, local politics and by a comparison with Amsterdam and other cities. As such it contributes to a better understanding not just of how and why super-diverse cities emerge but also how and why the reaction to a super-diverse reality can be so different.

By focusing on different aspects of superdiversity, coming from different angles and various disciplinary backgrounds, this book will be of interest to students and scholars in migration, policy sciences, urban studies and urban sociology, as well as policymakers and the broader public.

Peter Scholten is associate professor Public Policy & Politics at Erasmus University Rotterdam. He is coordinator of the interdepartmental research cluster on the Governance of Migration and Integration. His research focuses on issues of intercultural governance, multi-level governance and knowledge & public policy. Also, he is co-editor in chief of the journal Comparative Migration Studies. Peter also partners in various research projects, including AMICALL and IMPACIM (COMPAS Oxford), PROSINT (ICMPD) and FP7 project UniteEurope. In addition, Peter is fellow of the Montesquieu Institute and member of the board of the Center for History of Migrants and associate researcher at the Center for Migration Policy and Society (COMPAS), at Oxford University. Peter is also coordinator of the IMISCOE research cluster on ‘Research-policy dialogues on migration and integration in Europe, member of the Immigration Research Group of the Council for European Studies (CES) and senior-member of the Netherlands Institute for Government (NIG).

Maurice Crul is a professor at the Free University in Amsterdam and the Erasmus University in Rotterdam. He is the international chair of IMISCOE, a network of excellence in the fields of migration and diversity. In the last twenty years Maurice Crul mostly worked on the topic of education and children of immigrants, first within the Dutch context and in the last ten years in a comparative European and transatlantic context. Maurice Crul coordinated the international TIES project (The Integration of the European Second generation) which involved partners in eight European countries and a survey with 10.000 respondents. Next to this he was also one of the principal investigators of the transatlantic project ‘Children of Immigrants in School’. Together with John Mollenkopf, he published The Changing Face of World Cities. The second generation in Europe and the US (Russell Sage Foundation). In 2017 Maurice Crul was awarded the ERC advanced grant for the project Becoming a Minority (BAM) on the integration of people of native descent in majority minority cities in Europe.

Paul van de Laar was trained as economic historian and got his PhD form the Tinbergen Institute, School of Economics Erasmus University (1991). He continued his professional career in the interdisciplinary field of urban history and museum studies. His latest research is on comparative port history, migration and transnational developments in relation to urban transformations. Besides his academic research and teaching he is as managing director of Museum Rotterdam (the City Museum) responsible for the new focus on city museums and their role in a changing urban context, in particular superdiversity.