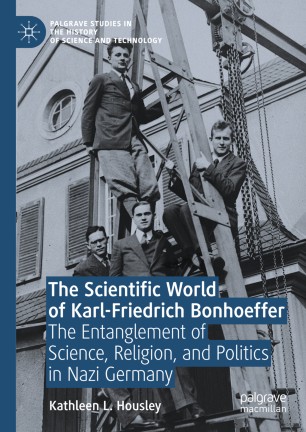 The Scientific World of Karl-Friedrich Bonhoeffer

The Entanglement of Science, Religion, and Politics in Nazi Germany

In twentieth-century Germany, Karl-Friedrich Bonhoeffer rose to prominence as a brilliant physical chemist, even as several of his relatives—Dietrich Bonhoeffer among them—became involved in the resistance to Hitler, leading to their executions. This book traces the entanglement of science, religion, and politics in the Third Reich and in the lives of Karl-Friedrich, his family and his colleagues, including Fritz Haber and Werner Heisenberg. Nominated for the Nobel Prize, Karl-Friedrich was an expert on heavy water, a component of the atomic bomb. During the war, he was caught in the middle between relatives who were trying to kill Hitler and friends who were helping Hitler build a nuclear weapon. Karl-Friedrich emerges as a complex figure—an agnostic whose brother was a renowned theologian, and a chemist who both reluctantly advised German nuclear scientists and collaborated with Paul Rosbaud, a spy for the British. Illuminating the uneasy position of science in twentieth-century Germany, The Scientific World of Karl-Friedrich Bonhoeffer is the story of a man in love with chemistry, his family, and his nation, trying to do right by all of them in the midst of chaos.

Kathleen L. Housley is the author of ten books. Her essays on what she calls the force fields between science, religion, and the arts have appeared in many publications, including Image, The Christian Century, and Metanexus.

“Not only is this book a missing chapter in the science that then led the world. It is also the dark tale of Nobel laureates caught up in self-delusion, moral complicity and moral tragedy. Yet exceptional moral integrity and steadfastness is present as well in the deeply moving story of the Bonhoeffer family. In short, add The Scientific World of Karl-Friedrich Bonhoeffer to the canon of essential works on science and morality. The lessons are still in front of us.” (Larry Rasmussen, Reinhold Niebuhr Professor Emeritus of Social Ethics, Union Theological Seminary, New York City)

“In a book both informative and lively, Kathleen Housley tells the exciting story of a gentle German physical chemist, Karl-Friedrich Bonhoeffer. The word Entanglement in the subtitle describes well the multitude of ways in which this scientist moved, actively and morally so, in some of the strongest currents of mid-twentieth century Germany. A uniquely committed resistance family in a nation of few resisters, a scientist with ties to the physics underlying nuclear fission who avoided work in the German atomic power project, the sad lack of recognition of moral failure by German scientists after the war—these are the strands Housley gathers in her eminently readable story of a good man in terrible times.” (Roald Hoffmann, chemist and writer, Frank H. T. Rhodes Professor of Human Letters, Emeritus, Cornell University)

“This book tells the fascinating story of a German physical chemist nominated five times for the Nobel Prize. As one of the leading German scientists of his era, Karl-Friedrich Bonhoeffer sought to undermine the efforts of his colleagues as they worked to build an atomic bomb for the Nazi regime. As a German citizen navigating the complex challenges of those times, he tried to follow his conscience and assist Jewish colleagues. As a member of the Bonhoeffer family, he watched as his brothers, Dietrich and Klaus, became involved in the plans to overthrow that regime, ultimately sacrificing their lives. Kathleen Housley has woven these threads together into a profound and compelling narrative about a remarkable individual during the terrible years of National Socialism.” (Victoria J. Barnett, General Editor, Dietrich Bonhoeffer Works, English edition, and author of “After Ten Years”: Dietrich Bonhoeffer and Our Time)

“This story of the eldest son in the accomplished and principled Bonhoeffer clan is carefully researched and thoughtfully argued.  The author does not shrink from drawing unexpected connections, making judgments and offering provocative speculations.  The result is an insightful, literary account of the context and conduct of science and Christianity in the politically charged Weimar and Nazi eras.” (Alan Beyerchen, Emeritus Professor of German History and author of Scientists Under Hitler)
Buy options