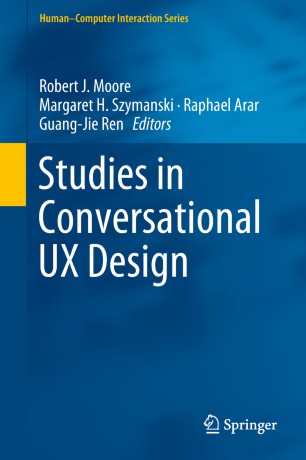 As voice interfaces and virtual assistants have moved out of the industry research labs and into the pockets, desktops and living rooms of the general public, a demand for a new kind of user experience (UX) design is emerging. Although the people are becoming familiar with Siri, Alexa, Cortana and others, their user experience is still characterized by short, command- or query-oriented exchanges, rather than longer, conversational ones. Limitations of the microphone and natural language processing technologies are only part of the problem. Current conventions of UX design apply mostly to visual user interfaces, such as web or mobile; they are less useful for deciding how to organize utterances, by the user and the virtual agent, into sequences that work like those of natural human conversation.

This edited book explores the intersection of UX design, of both text- or voice-based virtual agents, and the analysis of naturally occurring human conversation (e.g., the Conversation Analysis, Discourse Analysis and Interactional Sociolinguistics literatures). It contains contributions from researchers, from academia and industry, with varied backgrounds working in the area of human-computer interaction. Each chapter explores some aspect of conversational UX design. Some describe the design challenges faced in creating a particular virtual agent. Others discuss how the findings from the literatures of the social sciences can inform a new kind of UX design that starts with conversation.