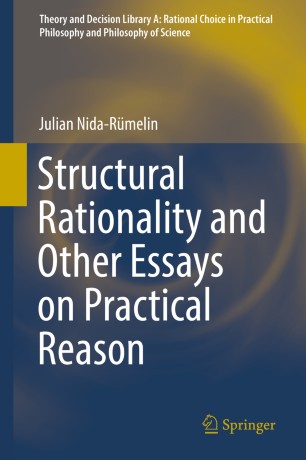 Structural Rationality and Other Essays on Practical Reason

Part of the Theory and Decision Library A: book series (TDLA, volume 52)

The approach is radical: It transcends the reductive narrowness of instrumental rationality without denying its practical impact. Actions do exist that are outlined in accordance to utility maximizing or even self-interest maximizing. Yet, not all actions are to be understood in these terms. Actions oriented around social roles, for example, cannot count as irrational only because there is no known underlying maximizing heuristic.

The concept of bounded rationality tries to embed instrumental rationality into a form of life to highlight limits of our cognitive capabilities and selective perceptions. However, the agent is still left within the realm of cost-benefit-reasoning. The idea of social preferences or meta-preferences cannot encompass the plurality of human actions. According to the author they ignore the plurality of reasons that drive agency. Hence, they coerce agency in fitting into a theory that undermines humanity. His theory of structural rationality acknowledges lifeworld patterns of interaction and meaning.