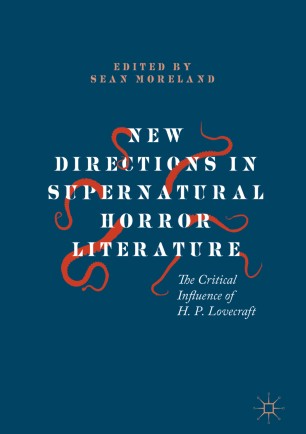 This collection of essays examines the legacy of H.P. Lovecraft’s most important critical work, Supernatural Horror in Literature. Each chapter illuminates a crucial aspect of Lovecraft’s criticism, from its aesthetic, philosophical and literary sources, to its psychobiological underpinnings, to its pervasive influence on the conception and course of horror and weird literature through the twentieth and early twenty-first centuries. These essays investigate the meaning of cosmic horror before and after Lovecraft, explore his critical relevance to contemporary social science, feminist and queer readings of his work, and ultimately reveal Lovecraft’s importance for contemporary speculative philosophy, film and literature.

Sean Moreland is Professor of English at the University of Ottawa, Canada, and editor of The Lovecraftian Poe (2017).

“It is great to see H. P. Lovecraft’s influential study Supernatural Horror in Literature finally receiving the critical attention it deserves. Moreland’s collection offers timely explorations of the critical terms, historical claims and intellectual debts of Lovecraft’s book, yet also manages to capture the urgency of contemporary debates on the Weird. Essential reading for Lovecraft scholars.” (Xavier Aldana Reyes, Senior Lecturer of English at Manchester Metropolitan University, UK, and editor of Horror: A Literary History (2016) and The Gothic Tales of H. P. Lovecraft (2018))

“This collection offers a variety of exciting approaches to the study of Lovecraft and his writing, via an innovative focus on Lovecraft’s Supernatural Horror in Literature that creates an original stimulus for discussion. These essays will make an invaluable addition to the growing canon of scholarly material on Lovecraft and Weird Fiction.” (David Simmons, Senior Lecturer in English and Screen Studies, University of Northampton, UK)

“The essays in Sean Moreland's outstanding anthology employ H.P. Lovecraft's seminal study, Supernatural Horror in Literature, to generate fresh approaches to the study of weird fiction and film.  Moving from classical philosophy to medieval monstrosity to contemporary fiction, these essays bring Lovecraft's ideas into contact with a range of writers and texts, striking sparks from the collision between them that throw new critical territories into sudden, sharp relief.  Once again, Sean Moreland shows himself at the forefront of editors at work in the study of weird fiction.” (John Langan, author of The Fisherman (2016))

“Sean Moreland's New Directions in Supernatural Horror Literature: The Critical Legacy of H.P. Lovecraft is a fascinating and wide-ranging collection that takes seriously S.T. Joshi's observation that the richness of Lovecraft's ambitious critical essay, Supernatural Horror in Literature, has been insufficiently mined by scholars and critics. Placing this essay center stage, Moreland has assembled an impressive roster of scholars who explore its insights, contexts, limitations, and influences from a variety of historical, disciplinary, and philosophical perspectives. An important contribution not just on Lovecraft, but on horror, the Gothic, and the weird more generally, the volume makes clear that Lovecraft's criticism is every bit as central to our weird contemporary moment as his increasingly ubiquitous fiction.” (Jeffrey Andrew Weinstock, Professor of English, Central Michigan University, USA)

“Stepping back from this adroit anthology we cannot help but admire how potent Lovecraft’s thought has been in the history of supernatural thought, as we watch its various themes weave creatively to and fro in the minds of others.” (Robert Waugh, Professor Emeritus, SUNY New Paltz, USA, and author of A Monster of Voices: Speaking for H.P. Lovecraft (2011))