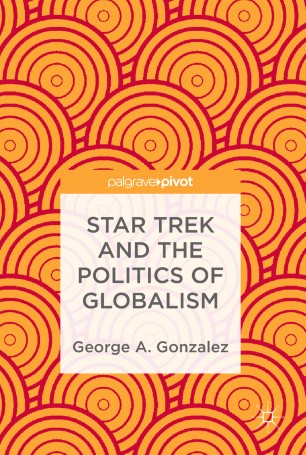 Star Trek and the Politics of Globalism

The Absolute, philosophized most saliently about by Georg Hegel, encompasses the entirety of reality.   The absolute (reality) is composed of five dimensions – height, length, width, time, and justice.  The five dimensions operate dialectically, and the normative values of reality inhere within the fifth dimension (justice) – hard, soft, moral, ethical, yellow, etc. ad infinitum.  The normative values from the fifth dimension (justice), in combination with the brain, comprise the human mind.  With the issues of climate change, world-wide biosphere destruction, nuclear weapons, international trade regimes, humanity has created the phenomenon of global politics – thereby changing the fifth dimension.  The argument in this volume is that the broadcast iterations of Star Trek allow us to comprehend significant aspects of justice and the politics of globalism – created through the advent of science, technology, engineering, etc.  The creators of Star Trek hold that nationalism is a psychological pathology and internationalism is rationality.