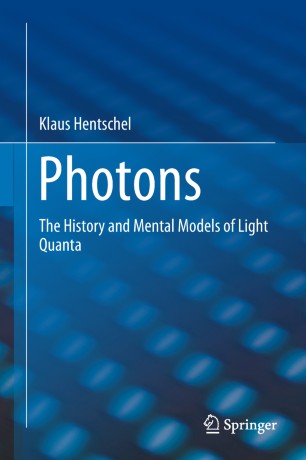 The History and Mental Models of Light Quanta

This book focuses on the gradual formation of the concept of ‘light quanta’ or ‘photons’, as they have usually been called in English since 1926. The great number of synonyms that have been used by physicists to denote this concept indicates that there are many different mental models of what ‘light quanta’ are: simply finite, ‘quantized packages of energy’ or ‘bullets of light’? ‘Atoms of light’ or ‘molecules of light’? ‘Light corpuscles’ or ‘quantized waves’? Singularities of the field or spatially extended structures able to interfere? ‘Photons’ in G.N. Lewis’s sense, or as defined by QED, i.e. virtual exchange particles transmitting the electromagnetic force?
The term ‘light quantum’ made its first appearance in Albert Einstein’s 1905 paper on a “heuristic point of view” to cope with the photoelectric effect and other forms of interaction of light and matter, but the mental model associated with it has a rich history both before and after 1905. Some of its semantic layers go as far back as Newton and Kepler, some are only fully expressed several decades later, while others initially increased in importance then diminished and finally vanished. In conjunction with these various terms, several mental models of light quanta were developed—six of them are explored more closely in this book. It discusses two historiographic approaches to the problem of concept formation: (a) the author’s own model of conceptual development as a series of semantic accretions and (b) Mark Turner’s model of ‘conceptual blending’. Both of these models are shown to be useful and should be explored further.
This is the first historiographically sophisticated history of the fully fledged concept and all of its twelve semantic layers. It systematically combines the history of science with the history of terms and a philosophically inspired history of ideas in conjunction with insights from cognitive science.

Klaus Hentschel studied physics, philosophy and history of science at the University of Hamburg, with a diploma in high-energy physics, a master in philosophy of science and a 1989 Ph.D. thesis on the misinterpretations of Einstein’s theory of relativity by contemporaries. He was assistant professor at the University of Göttingen, fellow of the Dibner Institute at MIT, Ernst Cassirer guest professor in Hamburg, and DFG-researcher in Berne. Since 2006 he has been full professor and director of the section for history of science and technology at the University of Stuttgart. His habilitation thesis deals with the interplay of precision experimentation, instrument making, and theory formation in astrophysics which led to the discovery of gravitational redshift in the solar spectrum. He also published books on the Einstein Tower in Potsdam, on Gauss’s instrument maker, on the mapping of spectra, and on visual cultures in science and technology. He was contributing editor and consultant to the Collected Papers of Albert Einstein, and he is the editor of nearly 20 books on research technologies, on the mentality of physicists, on Kayser, Kirchhoff and Planck, on materials science, and co-editor of the Compendium of Quantum Physics. Concepts, Experiments, History and Philosophy (Springer 2009).For his historiographic work Hentschel was awarded five international prizes. He is a member of the German National Academy of Scientists Leopoldina and of the Académie International d’Histoire des Sciences.

About the translator: Ann M. Hentschel earned her Bachelor of Arts in German and French at Tufts University in Massachusetts 1984 and was editorial assistant for the Einstein Papers Project at Boston University 1987-1991. She currently works as a freelance translator in the history of science in Stuttgart. Her publications include multiple volumes of The Collected Papers of Albert Einstein (Princeton Univ. Press, since 1998); The German Physical Society in the Third Reich edited by Dieter Hoffmann & Mark Walker, (Cambridge University Press 2007); Science and Conscience: The Life of James Franck by Jost Lemmerich (Stanford University Press 2011); and Gustav Robert Kirchhoff's Treatise "On the Theory of Light Rays" (1882) ed. Klaus Hentschel & Ning Yan Zhu (World Scientific 2017).

“The book is … doubly interesting, presenting readers with a useful review of key concepts in science along with reflections on the workings of science. It is highly recommended for physicists, physics students, and historians of science. … Nonetheless, researchers interested in science learning will find a rich source of material for further investigation in this book.” (Olival Freire, Isis, Vol. 111 (2), 2020)