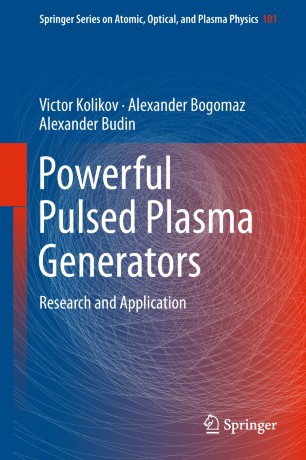 This book presents experimental and theoretical results on extremely powerful plasma generators. It addresses pulsed electrical mega-ampere arcs and the mechanisms of energy transfer from the arc into hydrogen, helium and air under pressures up to 250 MPa and currents up to 2 MA. Extreme plasma parameters and increased energy density in the arc were achieved. It was found experimentally that increasing the initial gas pressure to hundreds of MPa leads to improved arc stability, high efficiency of energy transfer from arc to gas, and plasma enthalpy growth. The data obtained data provides the basis for the development of electrophysical devices with high energy density, e.g. high intensity sources for visible, UV and X-ray irradiation for laser pumping, generators of high enthalpy plasma jets, and plasma chemical reactors.

V. Kolikov: has been working at the Institute for Electromechanics, Academy of Science of USSR (now the Institute for Electrophysics and Electric Power, Russian Academy of Science) since 1967, first as a Laboratory Assistant and now as Vice Director. He has published 159 papers and one book, and holds five patents. In 2005 he received his Science Doctor Degree from the IEE RAS.

A. Bogomaz: was born in Leningrad, USSR in 1943. He graduated from the Physical Faculty of Leningrad State University in 1967 and completed his Ph.D. in electrophysics at the Institute of Problems of Electrophysics (St.-Petersburg) in 1981. Now he is a leading researcher at the Institute for Electrophysics and Electric Power, Russian Academy of Sciences (IEE RAS, St. Petersburg). He is the author or co-author of more than 100 papers. His chief scientific interests are in the electrical technology and physics of high-current discharge in high and ultrahigh pressure gas.

A. Budin: was born in Frankfurt on Oder, Germany, in 1956. He received his M.S. degree from Leningrad Polytechnic Institute, Russia in 1979 and his Ph.D. degree in electrophysics from the Institute of Problems of Electrophysics in 1997. He is currently head of the laboratory at the Institute for Electrophysics and Electric Power, Russian Academy of Science. His main areas of scientific activity are the physics of high current arc discharges in dense gas media, electrodischarge accelerators and hypervelocity impact, pulse plasma generators and pulse power sources. He is the author or co-author of more than 160 papers.