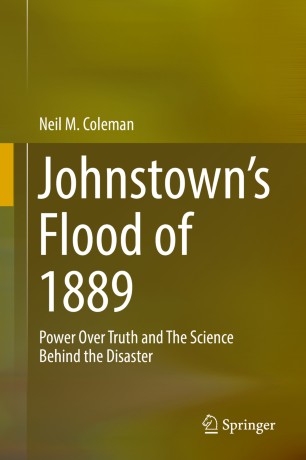 Power Over Truth and The Science Behind the Disaster

Science now reveals the true cause of the dam breach flood that destroyed Johnstown in 1889.  The tragic loss of more than 2200 lives was preventable; the initial investigation of the flood was hijacked, delayed, and distorted by powerful members of the industrial elite. This book bridges the gap between history and science, reexamining eyewitness accounts of the flood and historic documents about the investigation, and applying new LiDAR, GPS, and hydraulic studies to solve the mystery – what caused the Great Flood of 1889?  The book includes a notable chapter on the “sister” of the South Fork Dam, “The Forgotten Dam” at Hollidaysburg, PA.

About the Book Author:

Neil Coleman served as a Senior Staff Scientist for two federal advisory committees, the Advisory Committee on Nuclear Waste and the Advisory Committee on Reactor Safeguards.  He retired in 2010 from the Nuclear Regulatory Commission in Rockville, Maryland, where he worked on licensing issues for the Yucca Mountain project, uranium mining, new reactor designs, and flood protection of nuclear reactors.  A Navy veteran, he served on the carrier USS Constellation, later earning the M.S. degree in Geology from the University of South Florida.  Mr. Coleman is a Professional Geologist in Pennsylvania and an emeritus member of the National Registry of Radiation Protection Technologists.  He currently teaches geophysics at the University of Pittsburgh at Johnstown.  He has numerous peer-reviewed publications, including lead authorship (with Victor Baker) of a chapter in the 2009 book “Megaflooding on Earth and Mars.”  His continuing interests include the safety of the nation’s dams, geophysics, the geology and paleo-hydrology of Mars, and research with colleagues on the watershed of the Little Conemaugh River.

About the Co-Author of the chapter, “The Forgotten Dam”

Stephanie Wojno is a recent graduate of Northern Missouri State University, where she earned a M.S. in Geographic Information Science (GIS). She also earned the B.S. degree in Geology from the University of Pittsburgh at Johnstown. Her expertise includes cartography, GIS and LiDAR analysis for both Government and educational clients and partners.